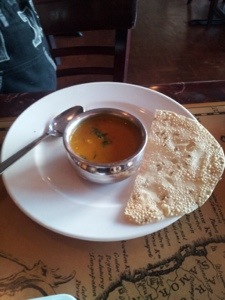 One night last week I went to Pradeep’s Indian Cuisine on Montana Avenue. I really like Indian food plus I’m really interested in India. There are over a billion people in India! I think they must make a lot of Indian food! At the restaurant here in Santa Monica, it’s not very big but it is quiet. To let you know, I do not like loud restaurants. The atmosphere there is really, really cool because on the tables there is a map of India! I didn’t really see the cities listed on the map but I do know three cities in India: New Delhi, Delhi, and Mumbai. And New Delhi is the capital city. But I should tell you about the food now. The first dish I had was a carrot, coriander soup. It smelled delicious and it tasted just as good! For my next course I had some potato pancakes that tasted really scrumptious. They were pretty small but they were round and a little mushy but good mushy. Then I had a biryani which is rice with peas, almonds, cranberries and herbs. I also had lentils and spinach with cauliflower. My dad and my brother also came with me to the restaurant and we all shared these things. Everyone enjoyed it! I will be going back again!