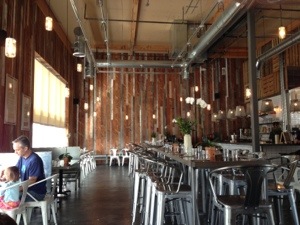 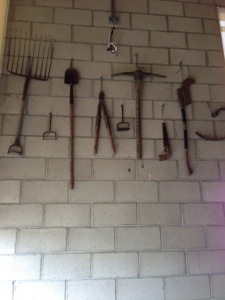 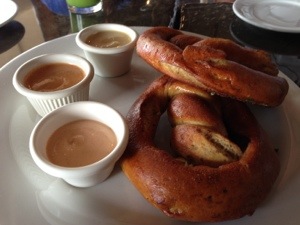 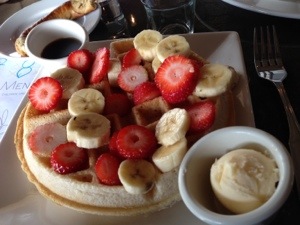 Today, Saturday, I went to an amazing restaurant, Sage Vegan Bistro. The atmosphere was pretty cool. The lights didn’t look like regular lights, they look like jars hanging from the ceiling and they had a foosball table outside which I’ve never seen at a restaurant before. We also saw garden tools on the wall because the whole restaurant is organic and mostly grown at local farms.

I first had a pretzel that I dipped into sauces. These were soft pretzels, not hard pretzels and there were two of them. And if you get the pretzel there is one sauce that is exceptionally spicy so be careful! My next course was a gluten free waffle with bananas, strawberries, syrup and butter. It was incredible! It looked really great and it tasted even better. On the outside it was crunchy and on the inside it was soft. My parents ordered the florentine and the biscuits and gravy with walnut vegan sausage. They also liked their food although my mom was complaining that we were eating too much bread and too much food. Even I think I ate too much food because I thought it was so good I wanted to keep eating.

Out of five stars I want to give this restaurant fifteen. I will be back soon!