Now, you know I don’t eat meat. For Thanksgiving, I don’t eat turkey, obviously. So you might be wondering what I did eat. I ate stuffing, veggie loaf, sautéed greens, tamales, mashed potatoes, gravy, macaroni and cheese, salad and pumpkin pie. You might also remember that I did a review on Sage Vegan Bistro. That’s where some of these foods came from. From Sage we had the greens, tamales, gravy and pumpkin pie. Then, my grandma made stuffing and my grandpa made the mashed potatoes. My mom made the veggie loaf and the mac and cheese.

My aunt brought the thing that I’m going to review today – she told us it was a surprise. Me, my brother and my cousin kept on guessing what it was. After we had finished our main Thanksgiving feast and it was time for the pumpkin pie, my aunt revealed the secret surprise. It was a: 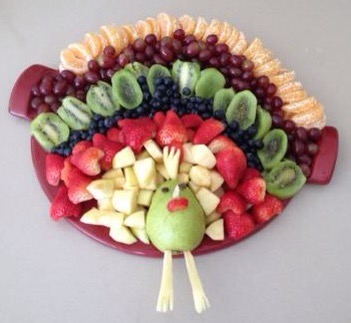 The vegan turkey was made out of all kinds of fruit. There were clementines, grapes, kiwi, blueberries, strawberries, apples, and then, for the body, there was a pear. It had two apple core feet, a beak and a crown, a strawberry mouth, and two little currants for the eyes. This was so awesome! We were really excited.

If you want to make this vegan turkey for your next Thanksgiving it only takes a few simple steps. First, you get a pear and put the currants on with toothpicks. Then stick the strawberry into the pear and carve out an apple crown, beak and feet from the apple core. Then surround the pear with the layers of fruit in the order you see in the picture. And ENJOY!!!