I have talked all about restaurants I visited on a recent vacation to Ojai. Now I want to tell you about this frozen yogurt place I went to up there as well. At some point on our vacation my brother and dad actually left to go to Henry’s soccer game and my mom and I had some special time together. We were walking around in town and found this frozen yogurt place called Bliss Frozen Yogurt and decided to go and try it out. 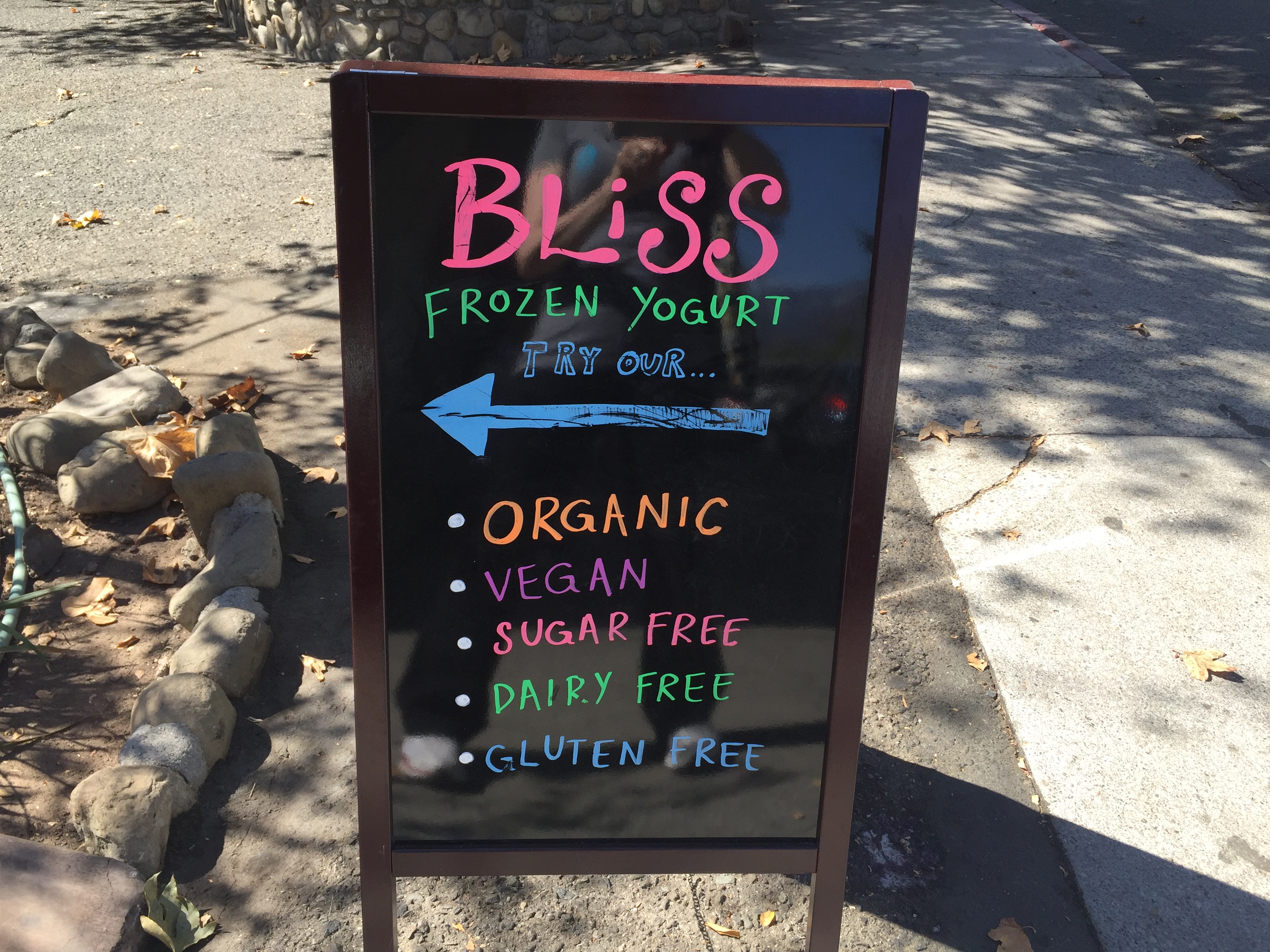 Bliss was pretty much like Menchie’s, if you have ever been there, where they have lots of flavors of dairy frozen yogurt but they also have a couple flavors of vegan frozen yogurt and plenty of toppings. Bliss was like that except for one difference. They had a dairy free mystery flavor. I thought that was really cool because then if you didn’t like the non-mystery flavor, then the mystery flavor might provide something you would enjoy. The mystery flavor could also be something that you didn’t like but then you could have the other one. Their dairy free flavor was cashew. I was really excited because cashews are my favorite nut and I wondered how the frozen yogurt would taste. They also had good toppings. Fruit and chocolate chunks settled into their places: right in my cup. 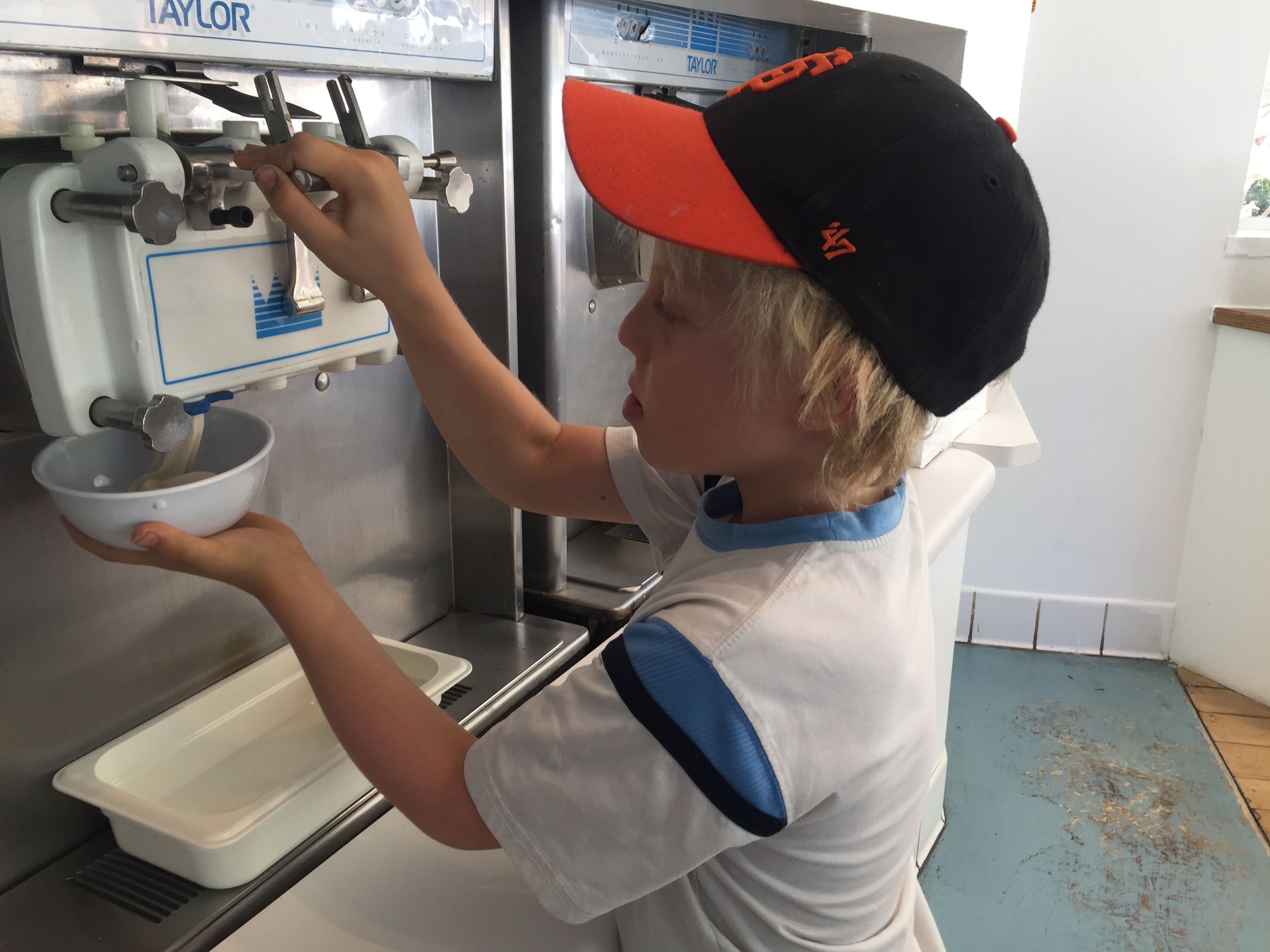 The lady who helped us told me something. She said the spoons change colors when you lick it! I thought that because the spoons were white and my tongue was red, the spoons would turn pink. But instead they turned blue. I’d like to figure out how it works. My mom thinks it has something to do with temperature.

The cashew flavor was very much like cashews, same color, same taste. Only the cashew frozen yogurt is soft and nuts are hard. The cashew flavor had a hint of coconut in the taste and was very creamy, which was really nice with the peanuts and chocolate chunks I put on top. 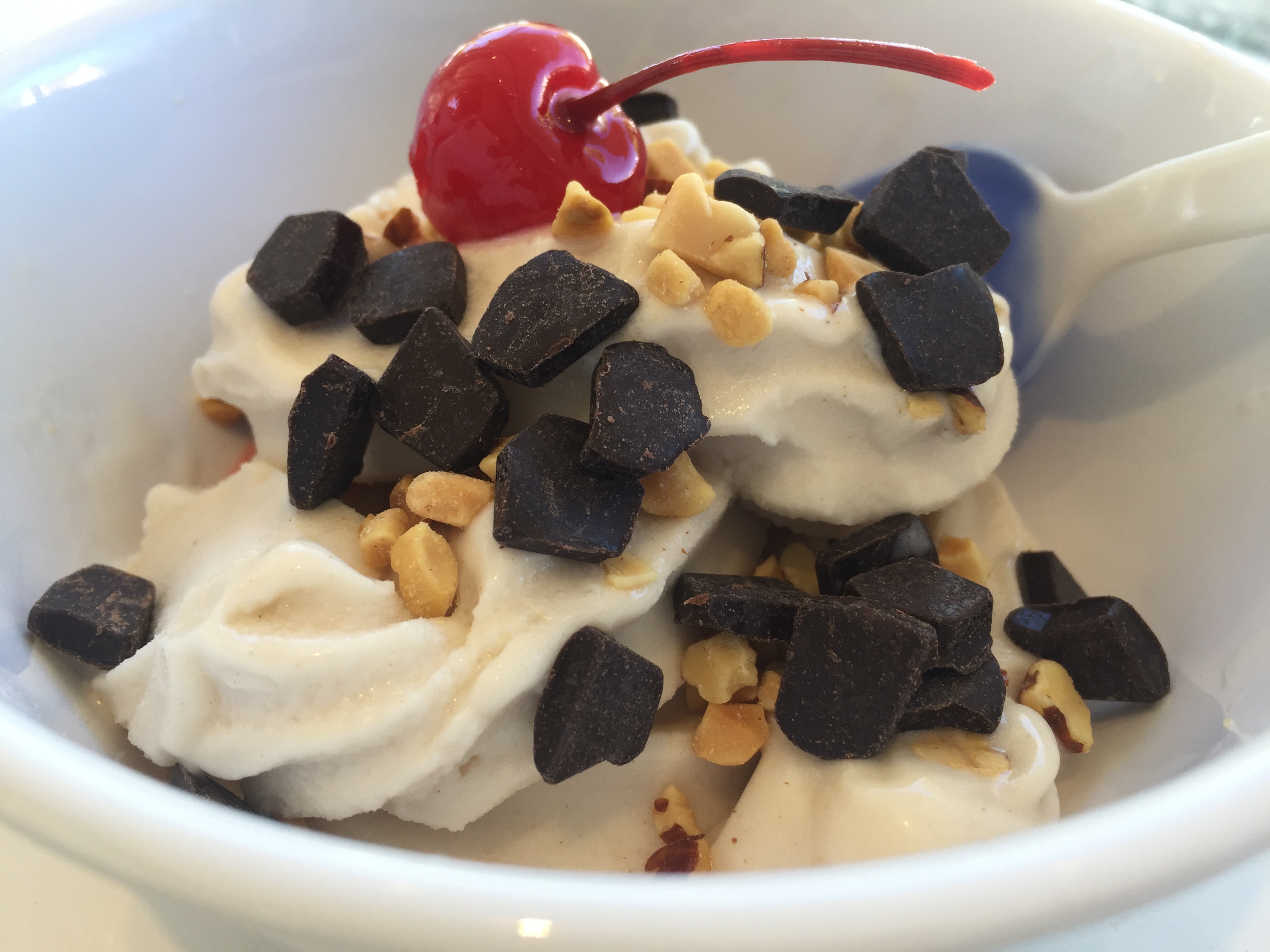 I gave Mom a few bites and I regret it. I should have saved every little bit that I had. Luckily, I liked it so much I came back another day and had some more! 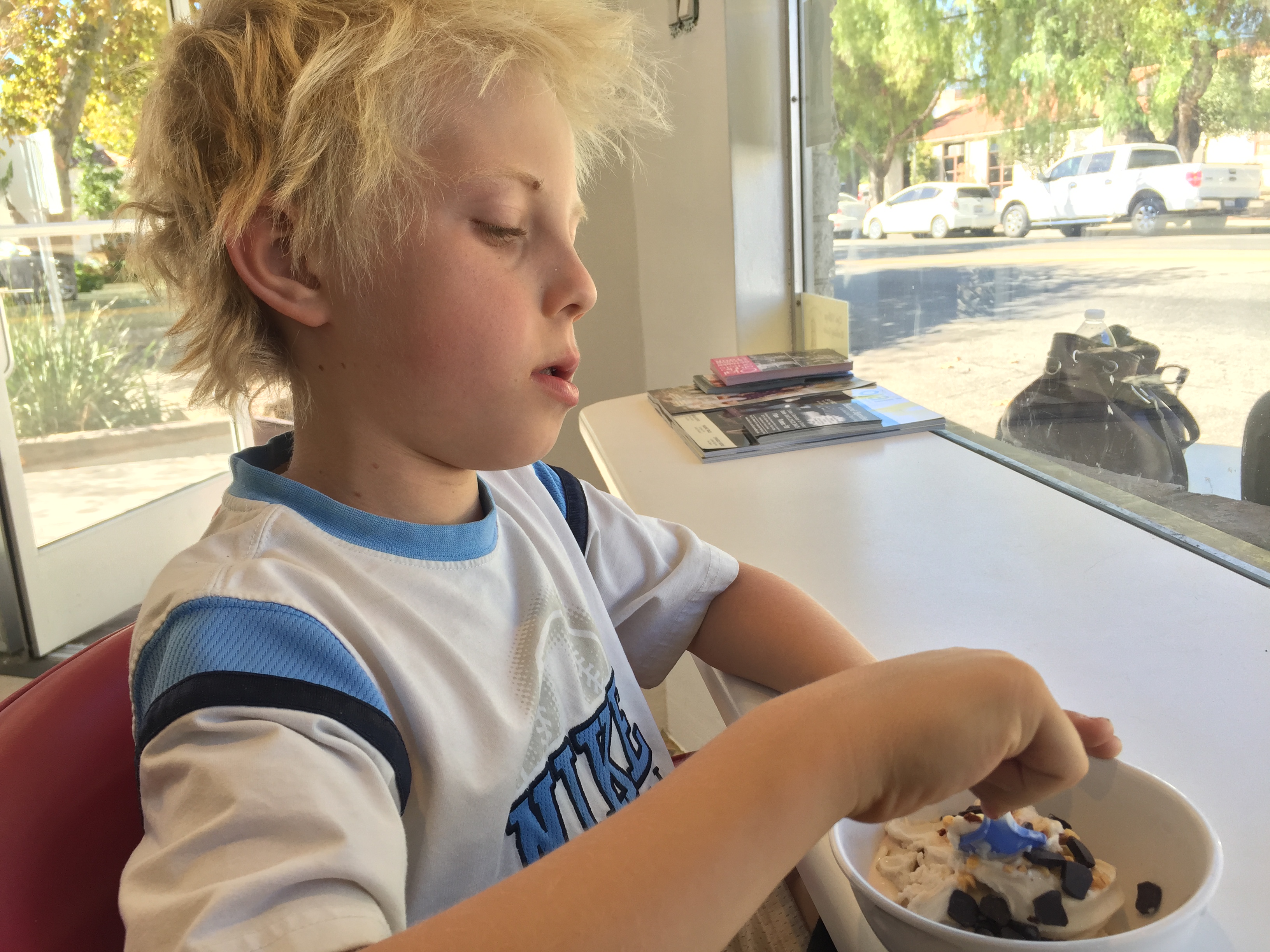 Above the counter where they give you the spoons and where the cash register was they had a couple of pictures about Ojai. They also had a picture where they said each time you bought frozen yogurt there, they donated money to the Ojai Valley Land Conservancy which protects opens spaces and nature. I was glad because I love helping people.  My most important thing I like to donate to is for to help people who are homeless and hungry.  It always makes me sad when I see people on the street without food or a place to live.  So it made me glad to see that Bliss yogurt was also picking something they cared about and giving money. 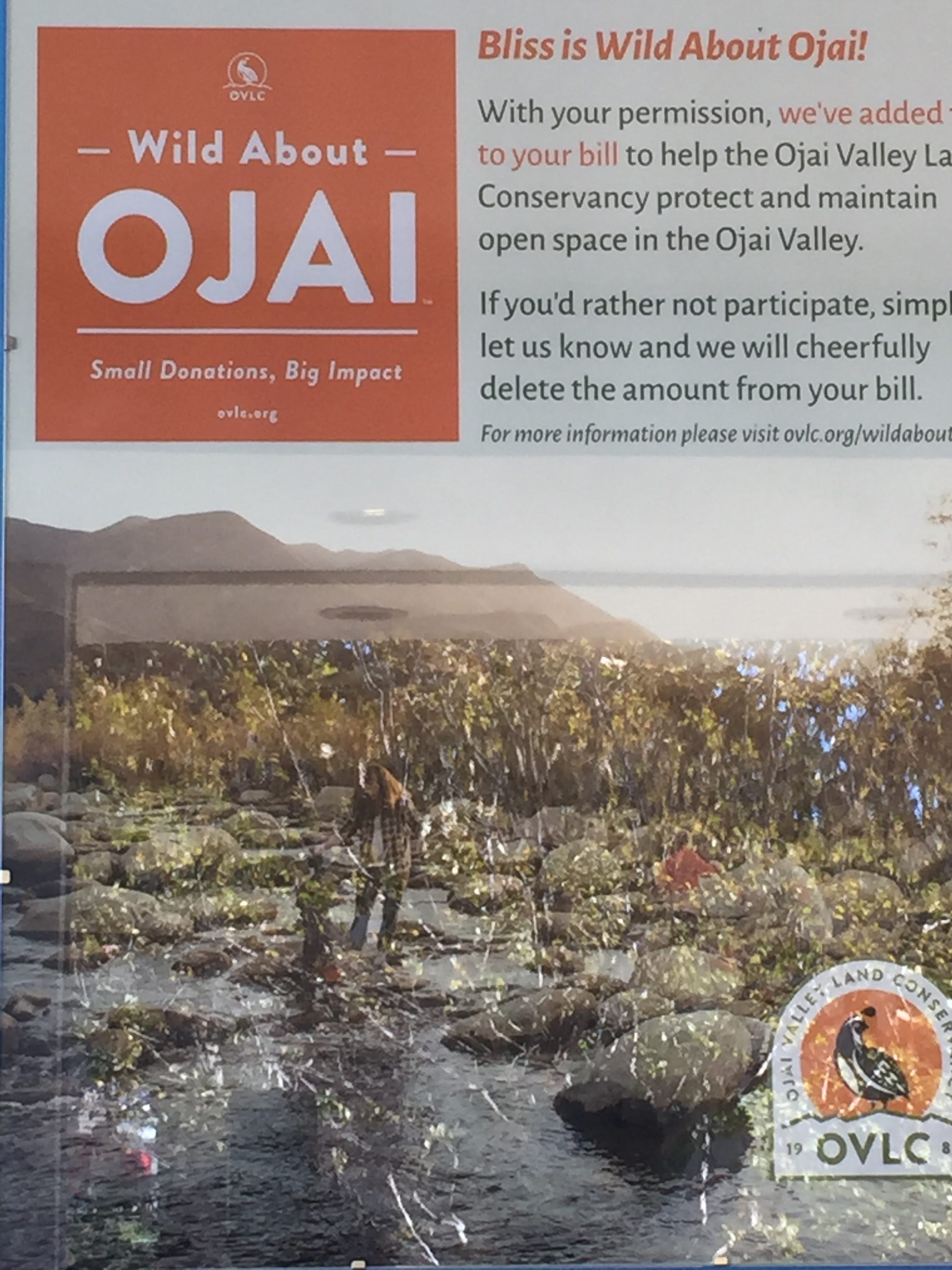