My mom’s friend Priya has been mentioned several times in my posts about these gluten free and vegetarian and vegan foods I tell you about.  Well, my mom and Priya decided to get together for some baking along with me, my brother, and Priya’s two daughter’s, Uma and Miya.  We planned to meet at our house at a sharp one o’ clock, (although it ended up being about a sharp 1:25 in the afternoon last Saturday).  We each chose a recipe out of a cookbook, Sweet Laurel, and this cookbook is filled with delicious recipes for desserts, snacks, and sometimes even early morning breakfasts.  All gluten free!  When they arrived we went into the kitchen to start our bake off. 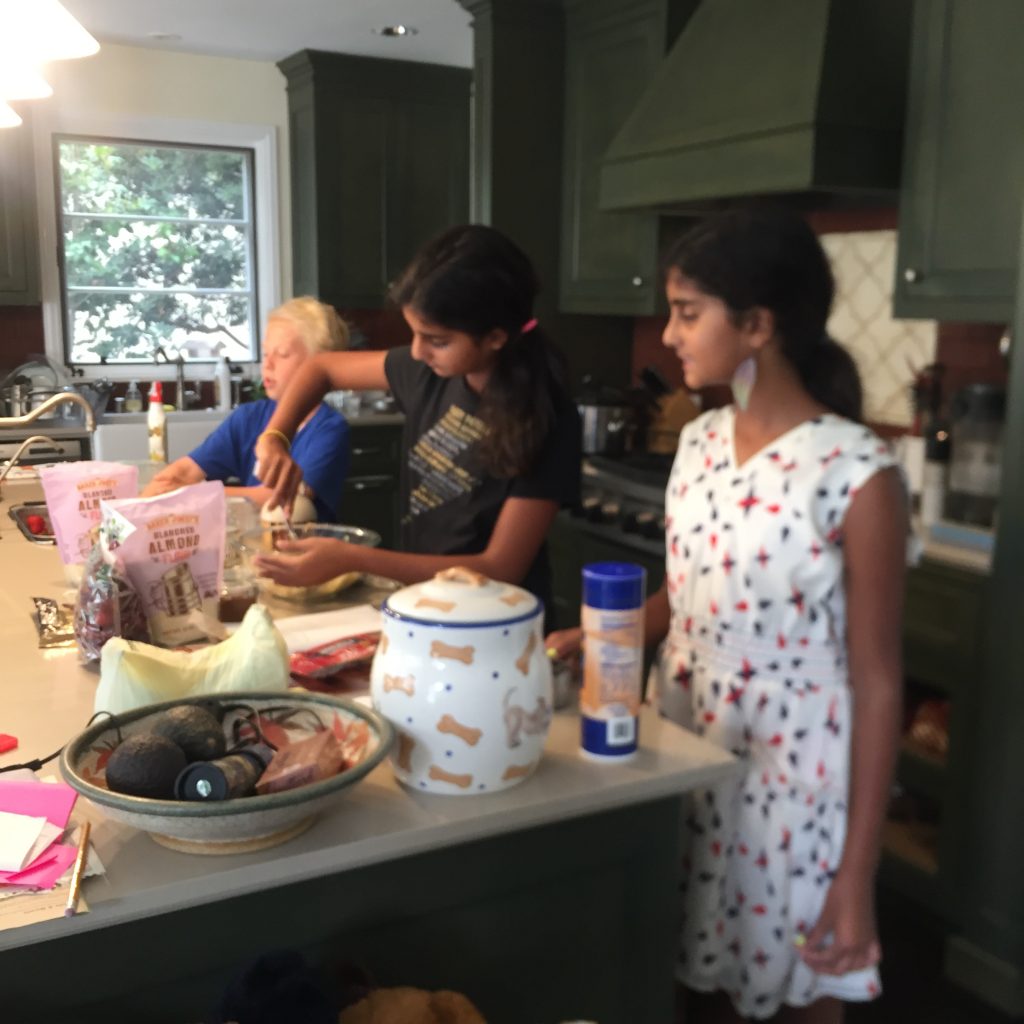 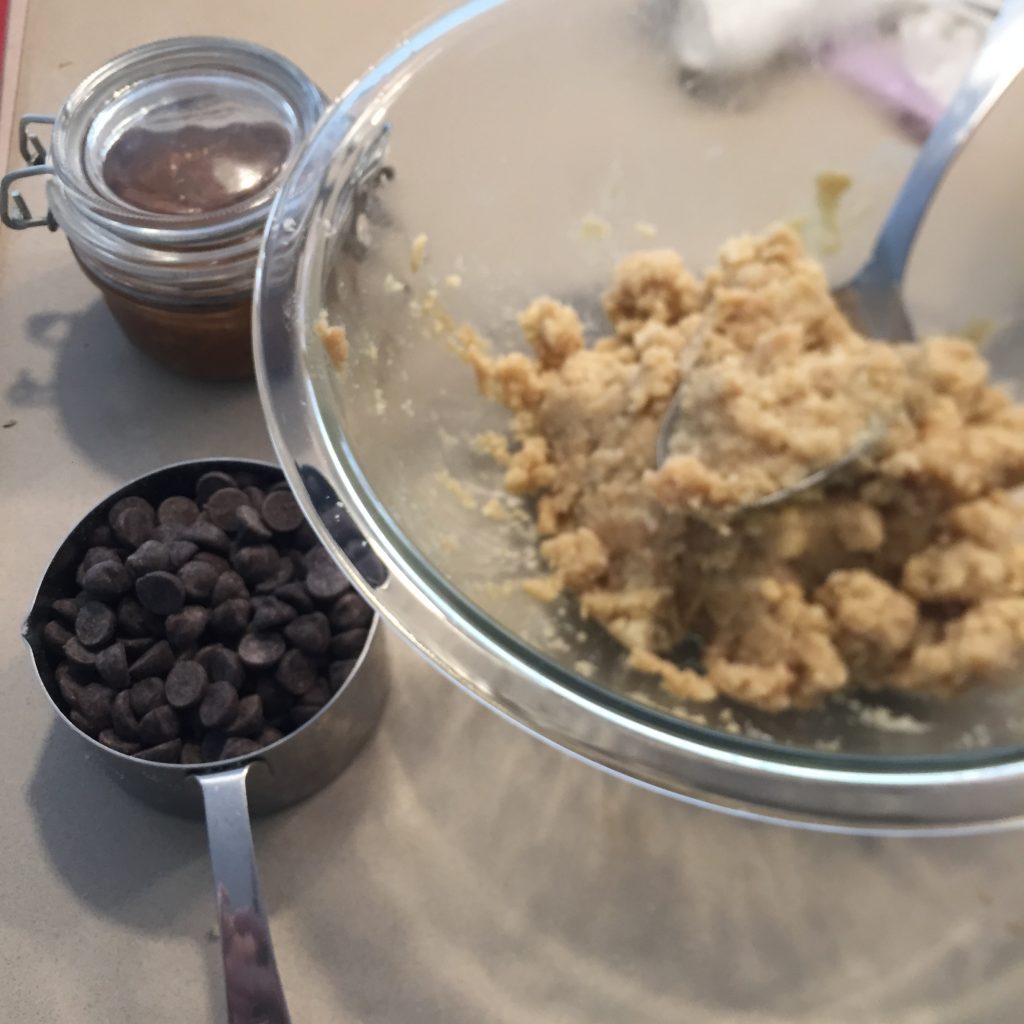 I’m not really an experienced baker, as you guys all know, I’m more of an eater than a maker.  If I was on Chopped Junior, which is a tv show on food network, my plate that I presented to the judges would most likely be an empty plate with a few crumbs left. “ Hello Judges,  the dish I have made for you today is (Burp) pesto pasta with pitted black olives and puttanesca sauce.  Would you like to smell the yumminess on my breath?” 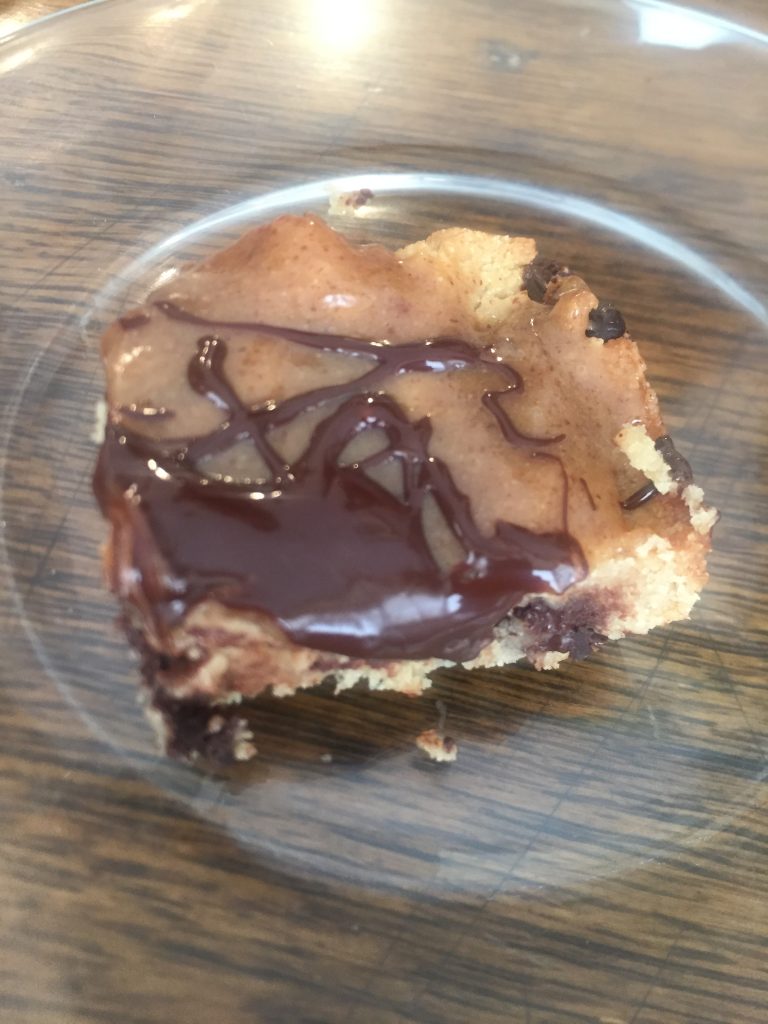 Anyway, the recipe they chose was for blondies with caramel sauce dripped all over the top of them, but we all agreed that the caramel sauce tasted more like almond butter. But still so good.  We made the blondies and then it was time for our recipe.  We chose the strawberry meltaway pie, which is just basically an ice cream pie but this one had strawberries and walnuts and gooey chocolate smack dab on top.

We chose the Blondies for our first recipe and made those adapting it here and there for our needs.  Then we started the pie.  We got the chocolate and the strawberries and the walnuts and it looked really good and we were all stealing chocolate chips.  Finally, me and Henry went into the pool when the pie was in the freezer and the blondies were in the oven because there was nothing else to do.  When the blondies were ready to eat, we came inside. 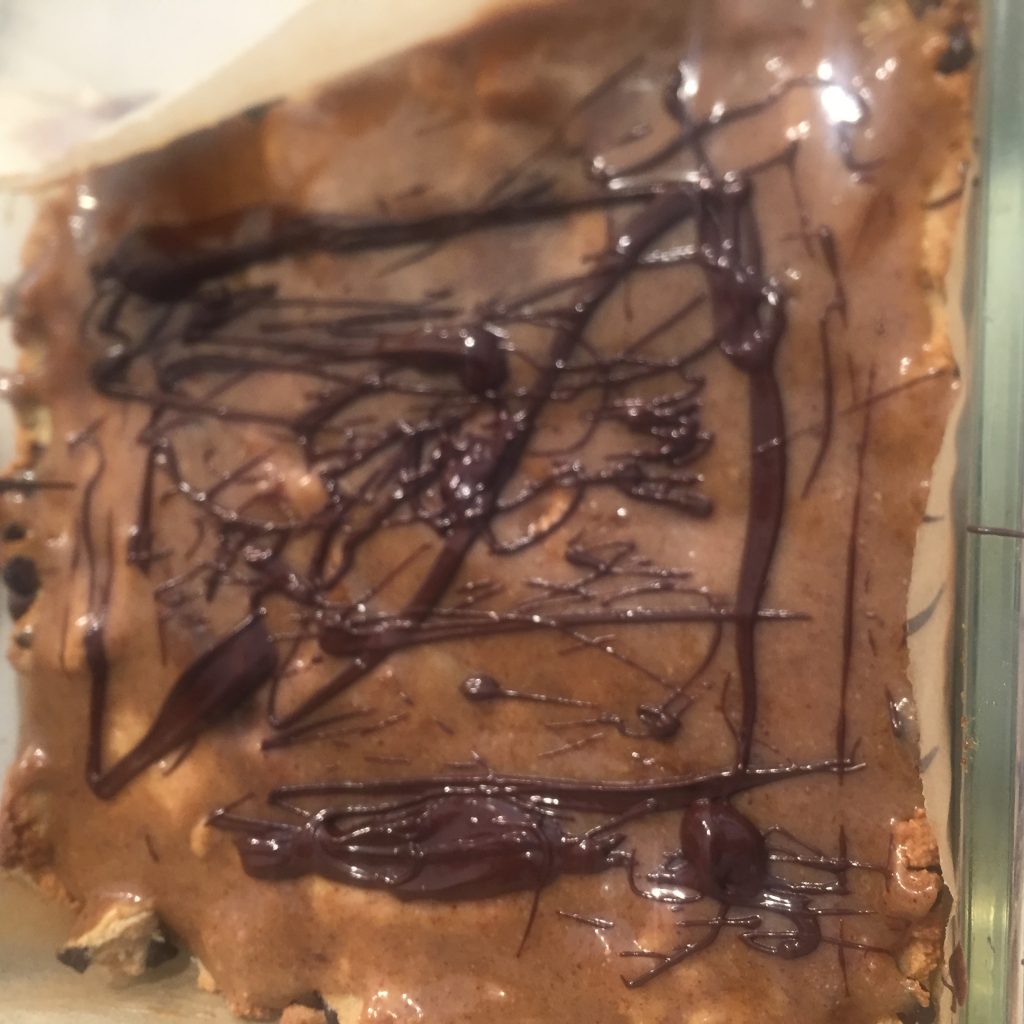 So we got the blondies out, and let me say-they were really good.  With the chocolate drooled all over them these blondies were sweet, delicious and mouthwatering.  Yum! 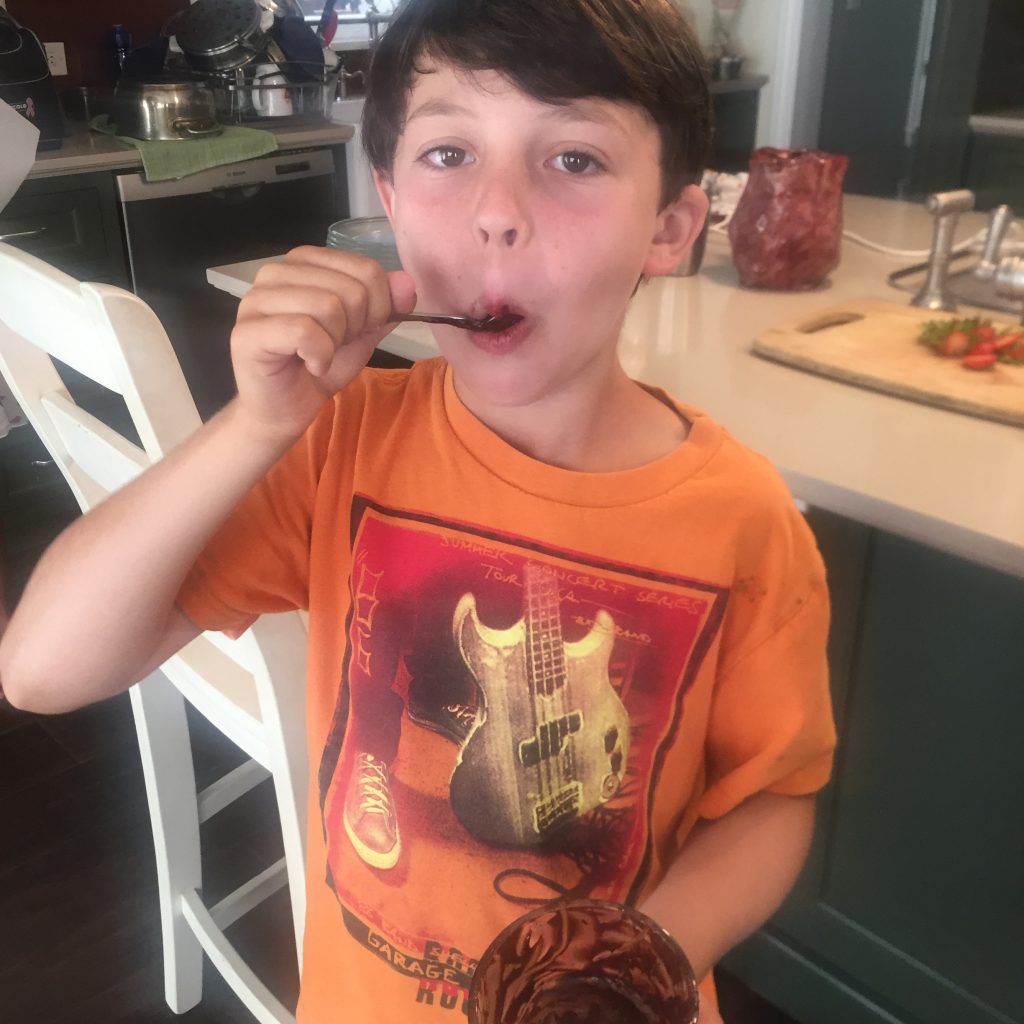 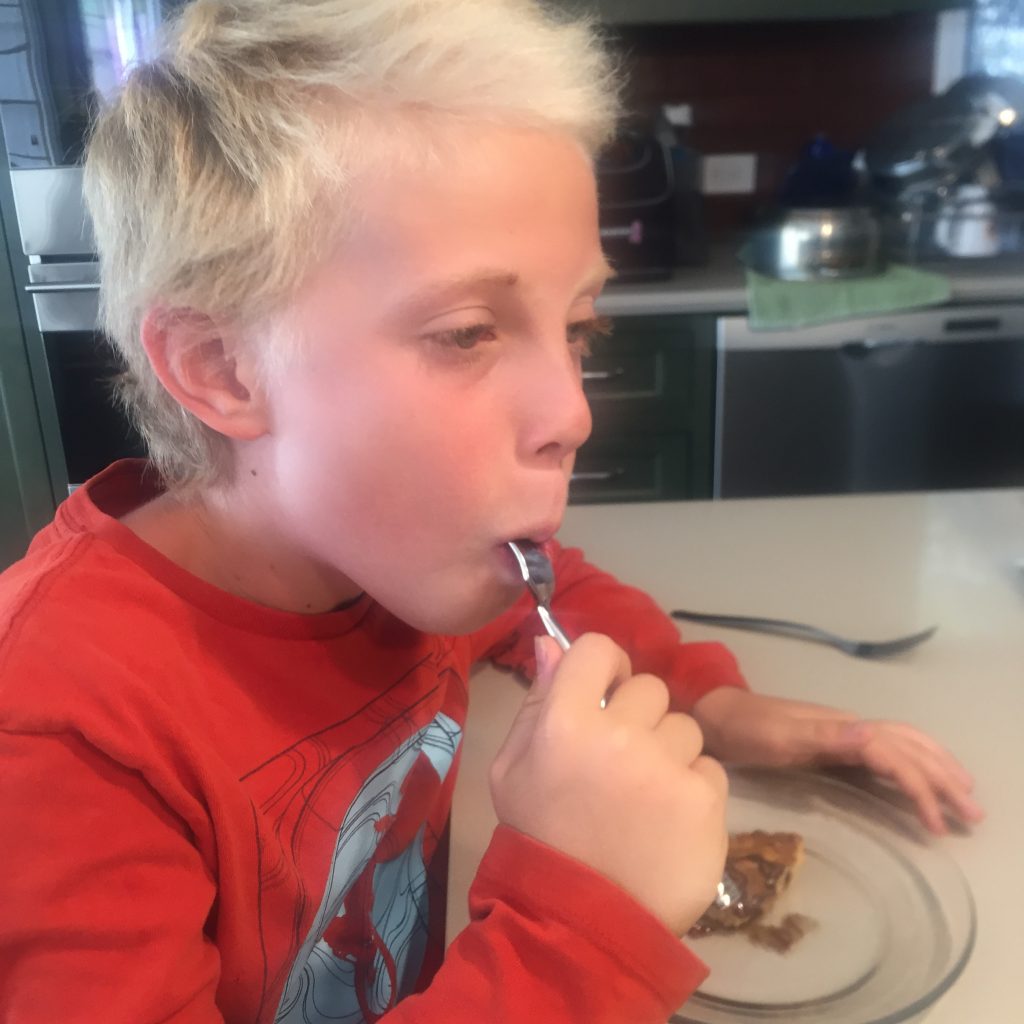 Preheat Oven to 350 degrees F.
Line a square pan with parchment paper
In a large bowl combine all ingredients except chips and caramel sauce
Stir until it forms a dough and add in half of the chips
Press the dough into the bottom of the pan
Bake for 15 minutes
Remove from the oven and then from the pan
Transfer to a rack and cool
Pour the caramel sauce over the blondies and let set

To make the chocolate drizzle, put remaining chips in a glass bowl. Either in a microwave or in a double boiler.
Use a fork to drizzle the chocolate over the blondies and let set again
Once set, cut into squares