Under the Bodhi Tree was so good I went right back for more!

I have been to some good pancake restaurants but the pancakes at this restaurant were the best.  Under the Bodhi Tree is a restaurant we discovered on the Big Island of Hawaii.  Everything on the menu was either raw, vegetarian or vegan and most of it was also gluten free.  It is so rare that I can go in and order just about anything on the menu.  It felt amazing to have so many choices.  There were so many choices that I had a hard time choosing.  In fact, it was so good that we went there two times: once for breakfast and once for lunch. 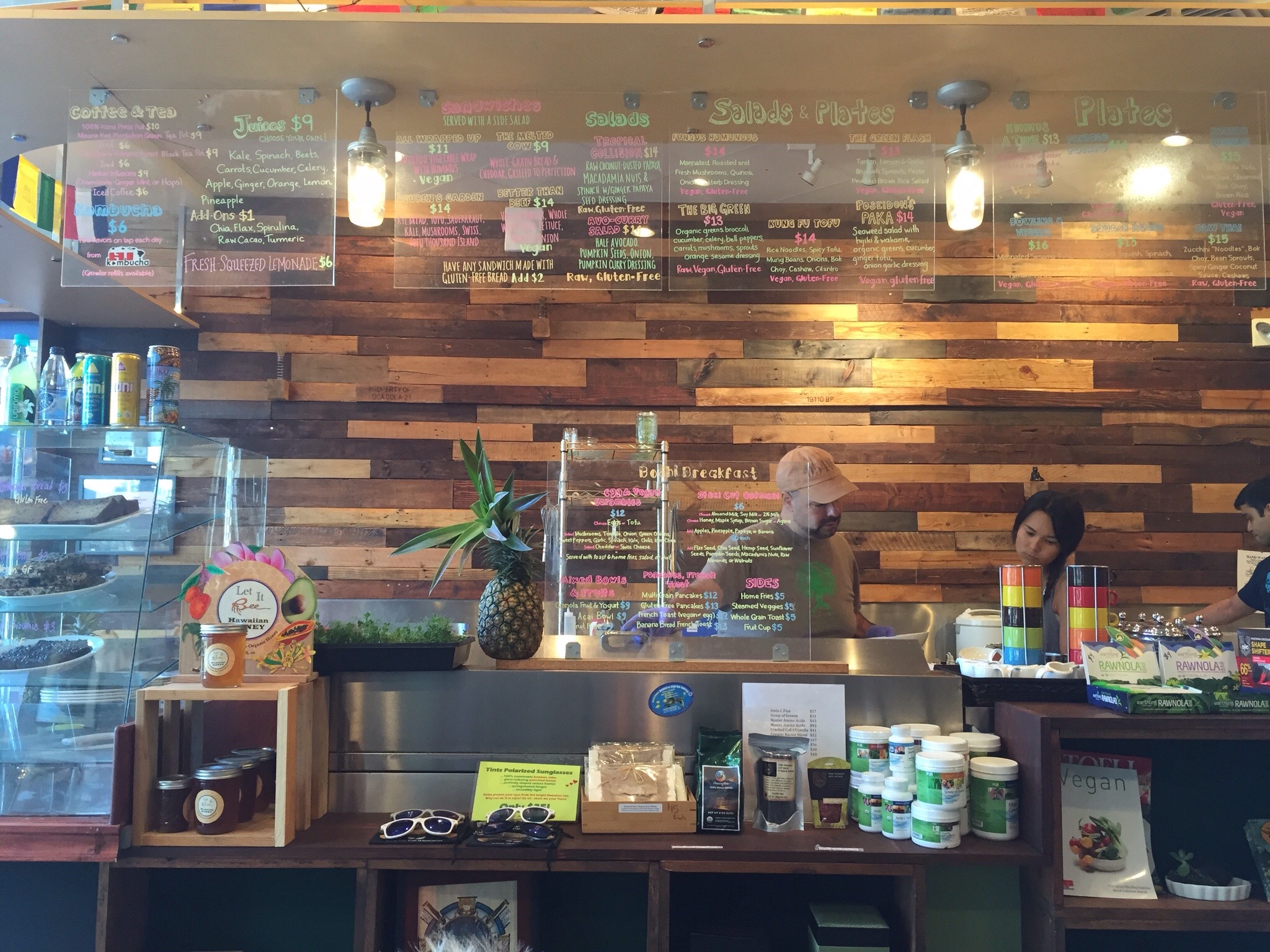 Here is a peek at the menu close up:

So back to those pancakes.  These pancakes tasted different than many other pancakes I have had.  The edges were a little crunchier than most edges and I thought it was better that way because I got the hard crunchy edge and the soft middle all in one bite.  Before we went on our vacation I was in a science camp and one day we learned about geology.  I used to think geology was about the study of rocks. But geology is actually the study of the earth’s composition.  I’m not sure you’ve noticed this about pancakes but the very middle is usually softer than the other parts.  So it was kind of like the structure of the earth.  The hard part was the crust. The softer part inside was the mantle which is 2/3 of the entire earth in case you didnt know this. And the very soft middle was like the core. 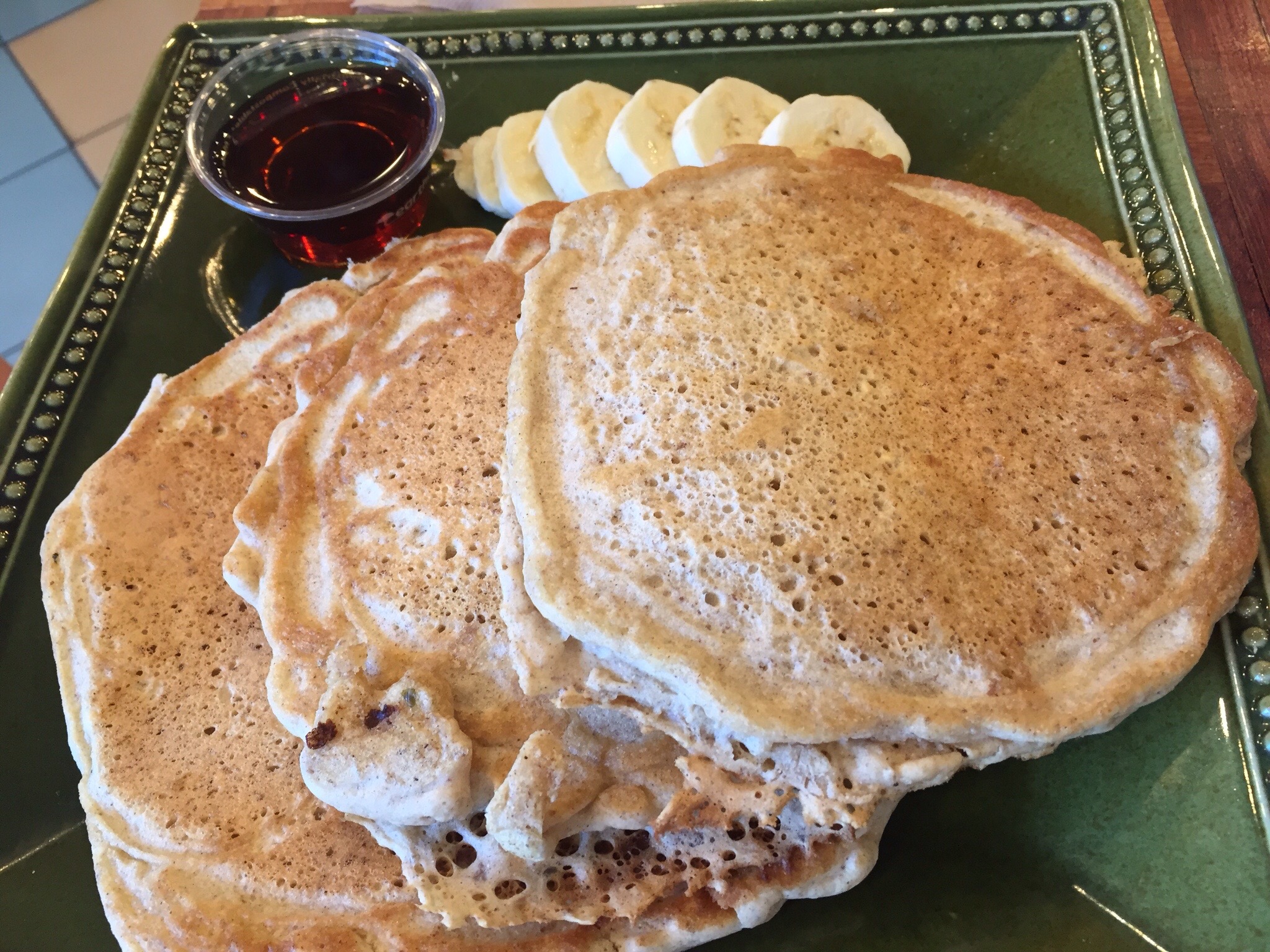 With the pancakes came a lot of maple syrup as you can see in the picture, along with sliced bananas.  My mom had a tofu scramble which she thought was just incredible and she also ordered a beautiful dish of fresh, organic fruit.  There was one fruit we didnt know what it was.  They told us it was called breadfruit. But the Hawaiian word for it is Ulu.  It kind of looked like a small green apple. 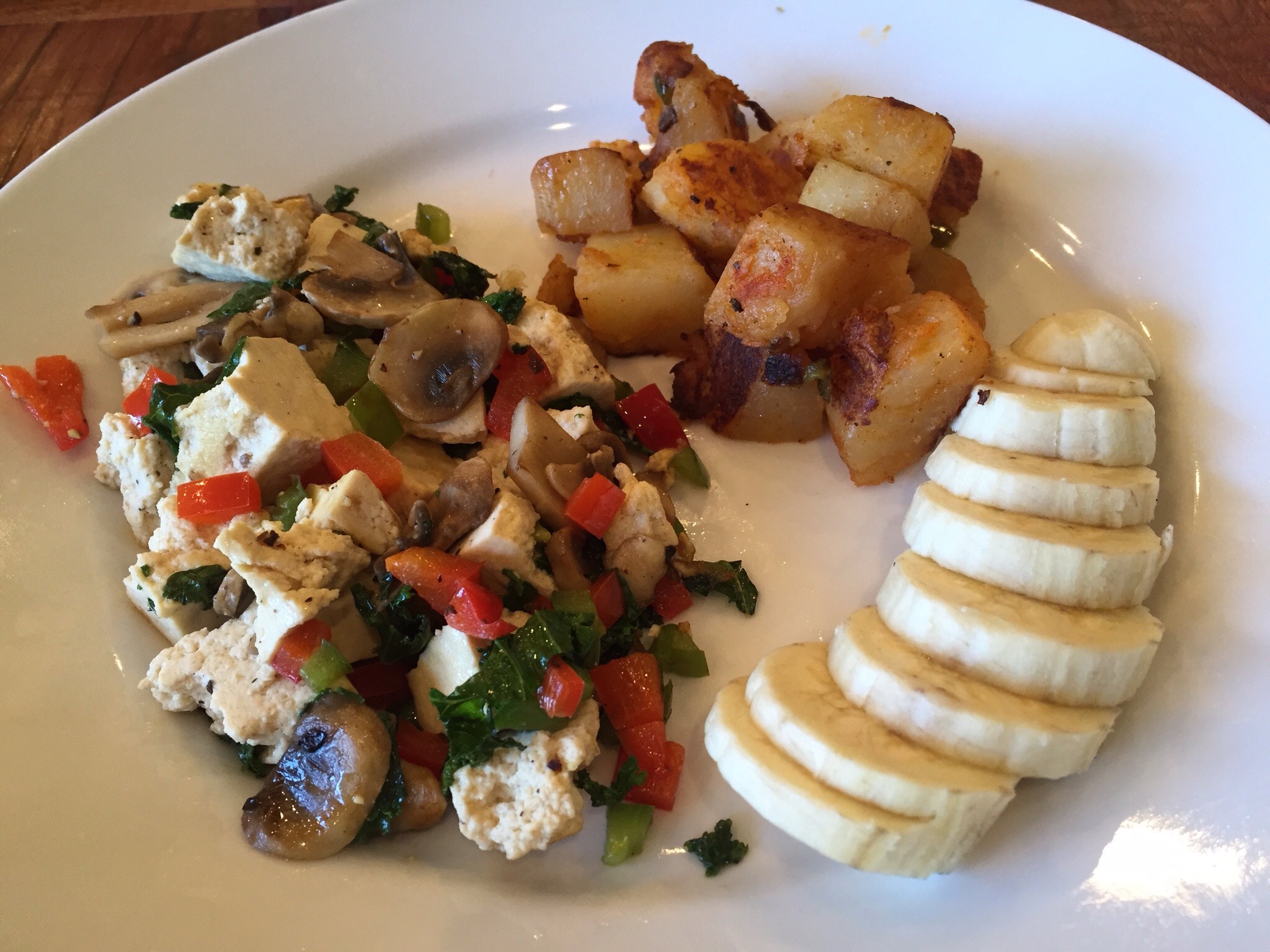 The owner of the restaurant came over to our table because I asked to meet him.  His name is Stephen.  He told us about his really interesting story about how he started this restaurant.  Stephen used to be a chef at a really fancy hotel.  He was making food that wasn’t gluten free or vegetarian or healthy in any way.  He actually came to feel that he was feeding people poison!  He was also eating this food and having a lot of health problems.  Finally, he decided to change his life.  He became vegetarian and then vegan and then raw vegan! He also looked for lots of gluten free options.  And he started this restaurant about a year ago to give the same kind of food to others. And this restaurant serves not only tasty food but also beautiful food.  Take a look at what we got When we came back for lunch! 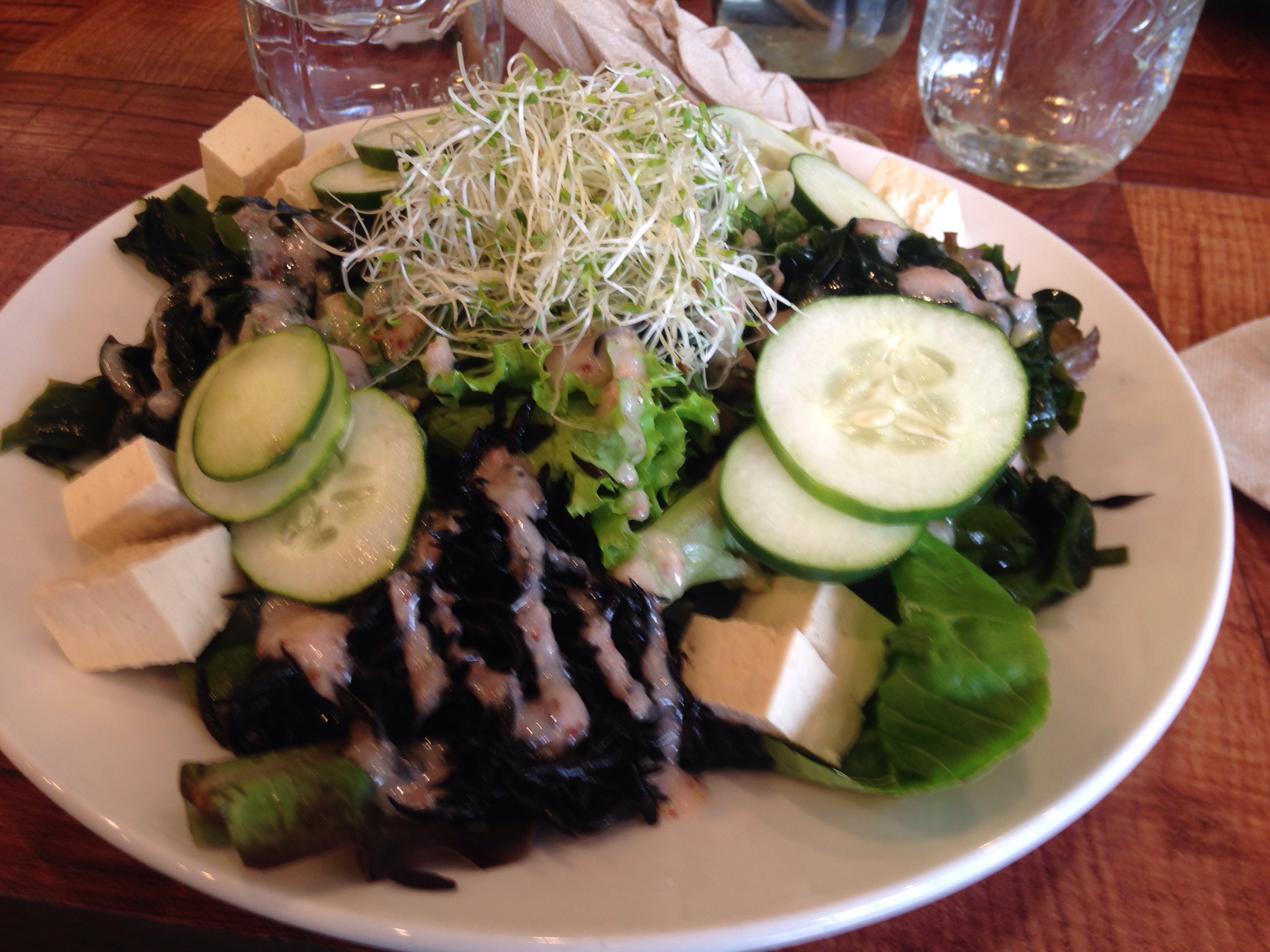 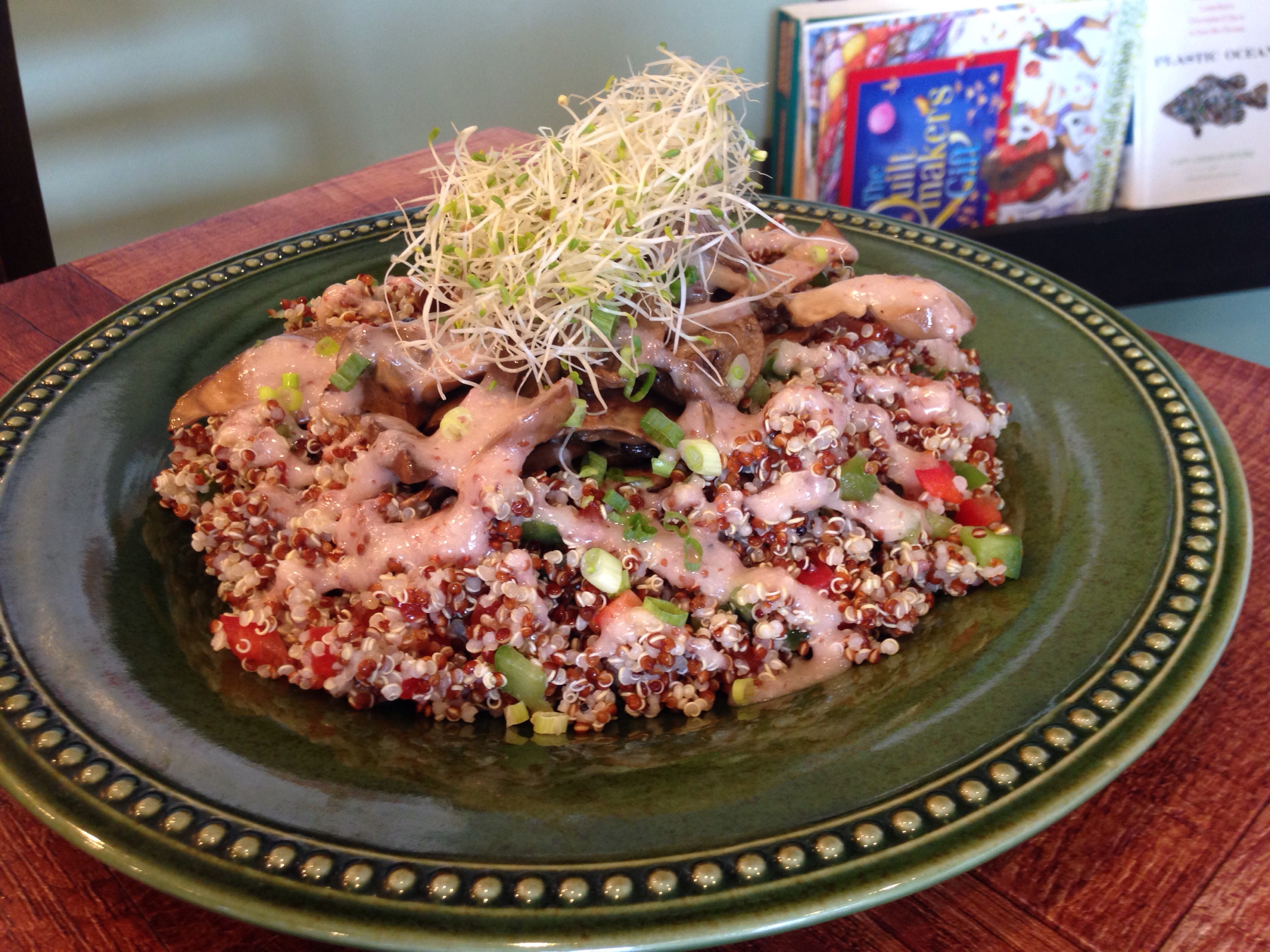 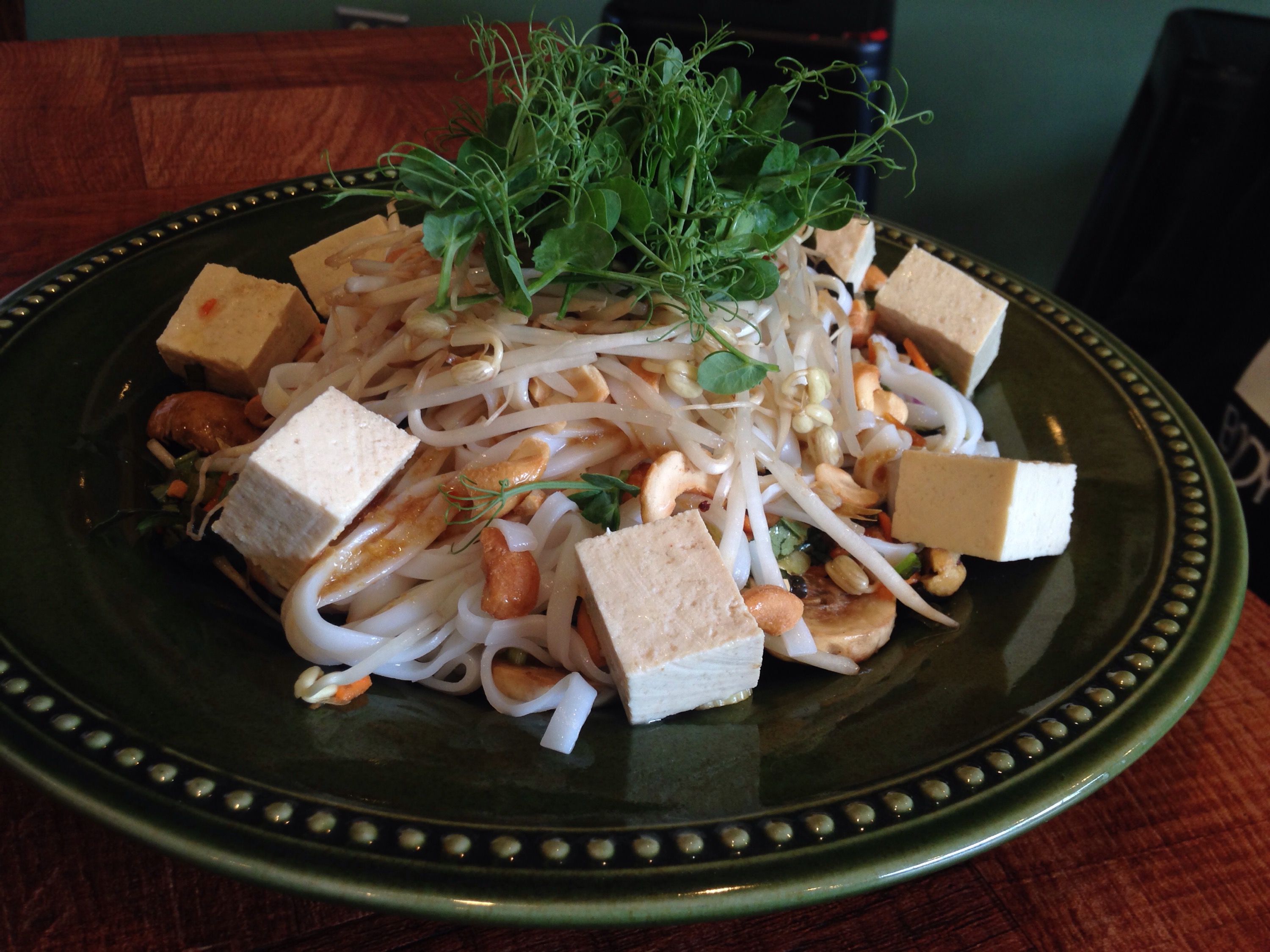 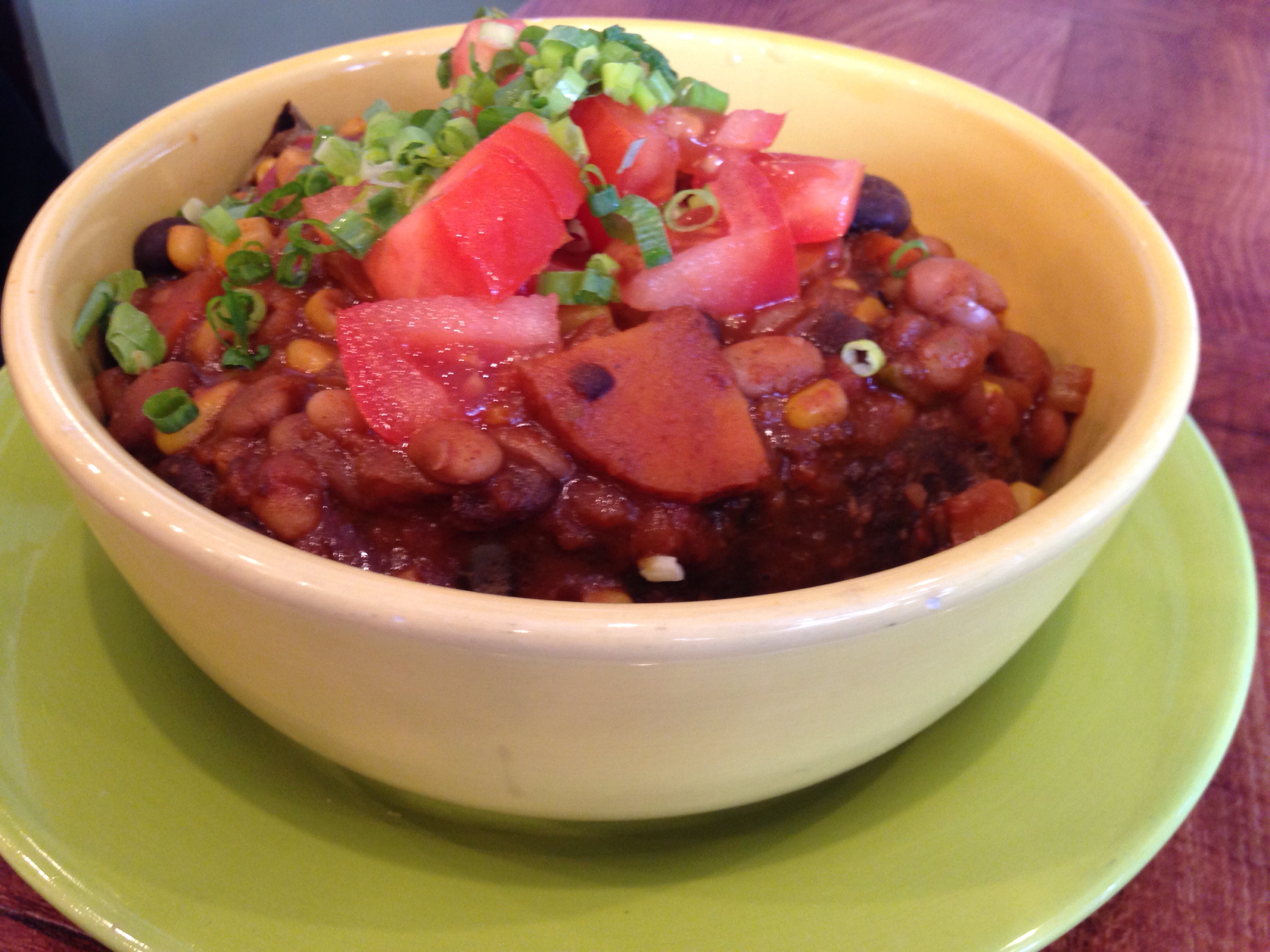 My dad ordered the Poseidon’s Paka which was a seaweed salad.  My mom ordered the Fungus Humungus salad which she really enjoyed.  Next up was mine. I had the Kung Fu Tofu and my brother had chili on a baked potato. I liked the Kung Fu Tofu a lot because there were somany different textures from the soft tofu to the crunchy sprouts on top of the noodles.  I tried everyone else’s lunch too and everything from the taste and the flavors of the food here to the presentation is worth the drive.  If you can’t drive here itmay even be worth the flight!