Did you watch the ball drop on New Years Eve? I did. I also tried to stay up till 12:00 midnight pacific time, but I fell asleep around 10:30 p.m. So Happy New Year everyone! Anyway, I went to my first restaurant of the new year: Urban Plates. This restaurant was mind-blowing to me! They had a community table with 8 seats and a fire pit in the middle. The place was basically an open kitchen with all these stations where you can just watch your food being made! And I got to sit down with Chef Jen and Chef Kelsey to learn more about the restaurant. 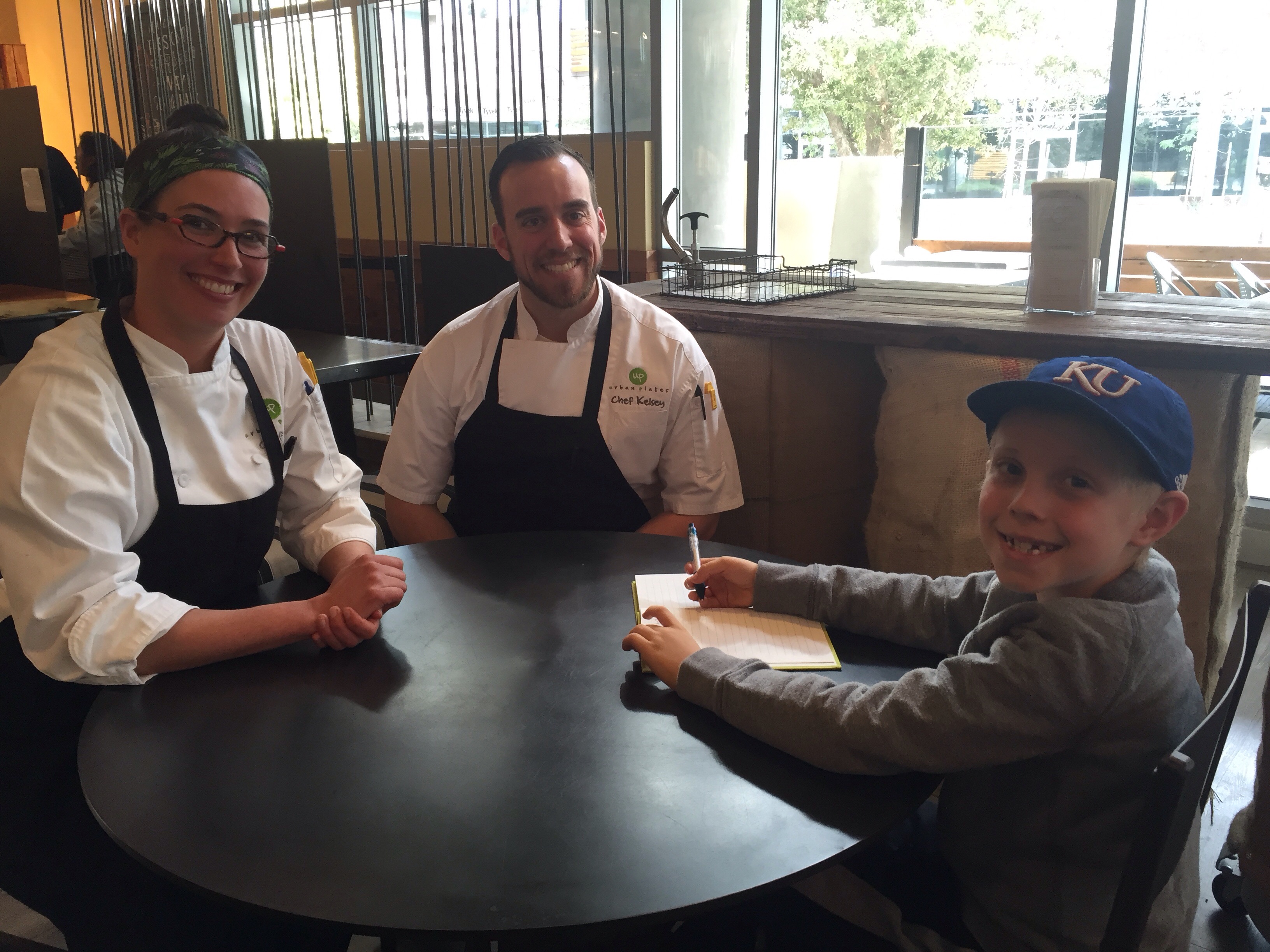 There are actually five locations of Urban Plates and it was started in San Diego. This location that I went to in Playa Vista was just opened this past October. Everything here is made from scratch and they use a lot of organic ingredients. They really try to create choices for people who have special diets like gluten free or nut allergies or vegan or vegetarian. They even have a separate gluten free menu and they put little signs up by the food so you know which ones are ok for you to eat. 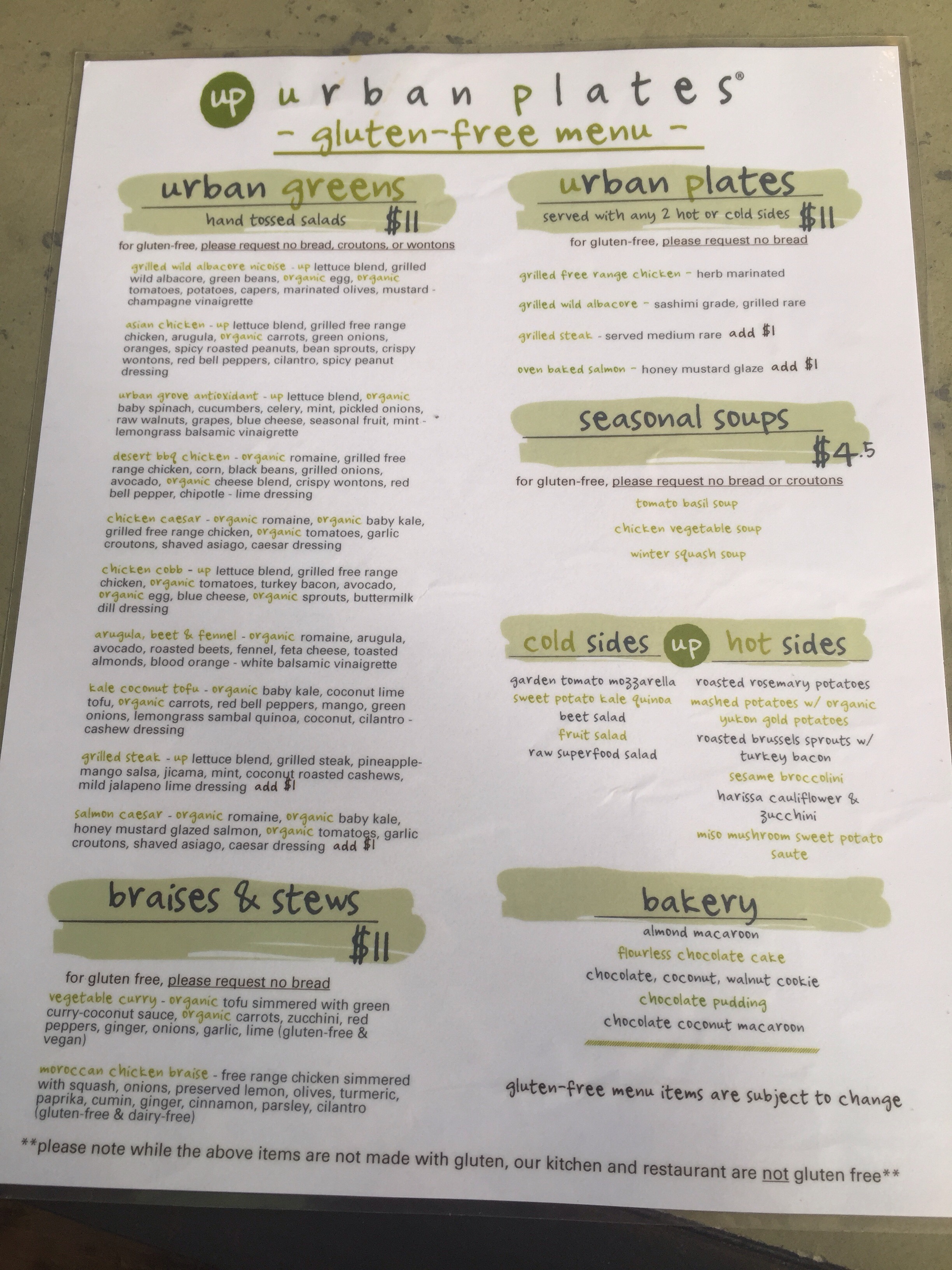 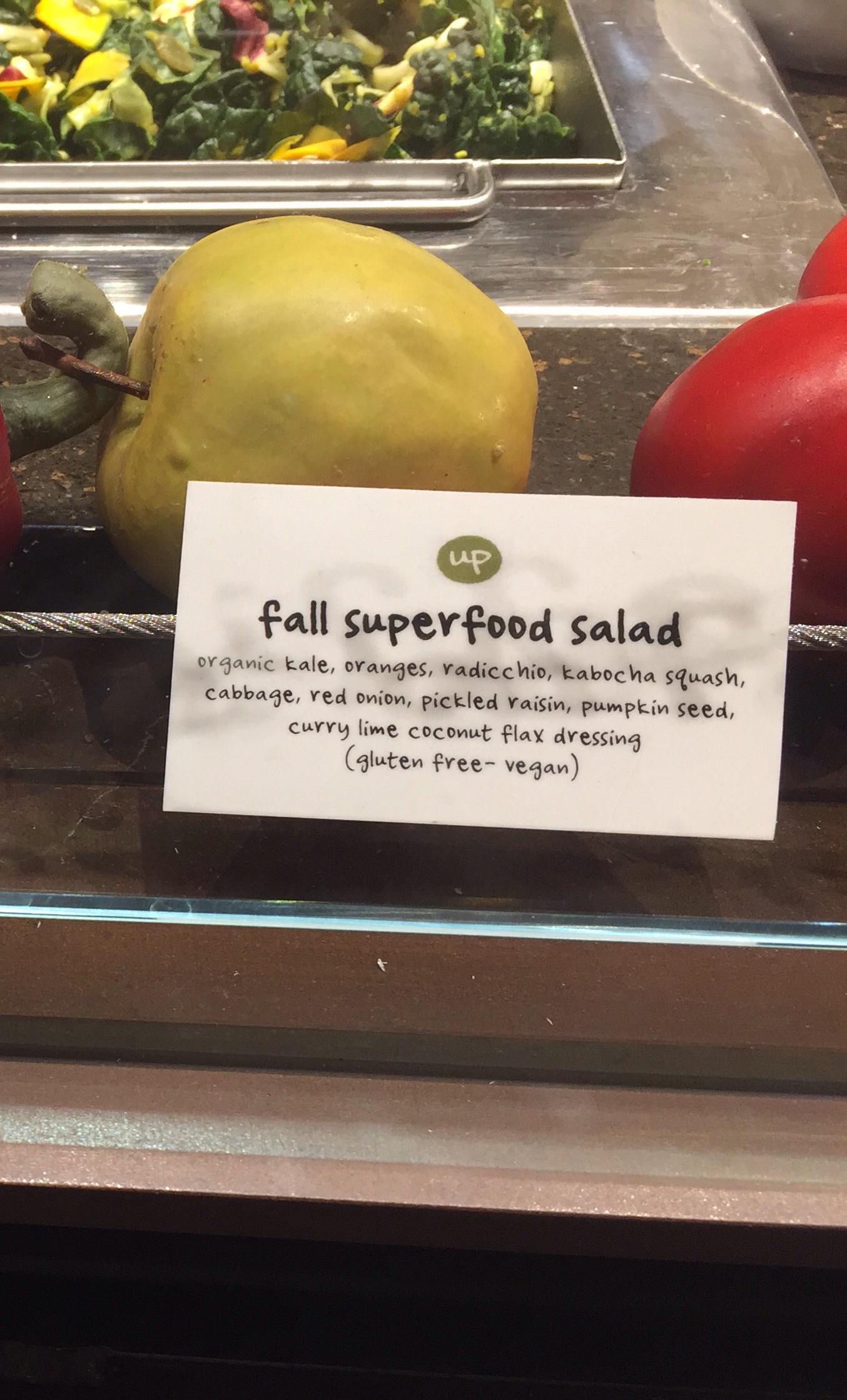 You know I like sports so I asked if any famous professional athletes ever come to the restaurant. They told me that Drew Brees, who is a quarterback for the Saints, and also Barry Bonds, who holds the all time record for home runs and played for the San Francisco Giants, have both come to their San Diego location. If they could get LeBron James to come to Urban Plates for lunch with me, that would make my year!

So, this location is in a shopping center; well it’s actually more like a village. On the way there me and my family were debating whether you could live there or not without ever going out. There are apartment buildings and a bunch of restaurants and shops. I brought up that you needed to go to your job. Then we realized that you can work at one of the restaurants or shops. There is also a movie theater and it is showing The Force Awakens.

This was a great way to start the new year. We tried just about every gluten free and vegetarian or vegan item on the menu and shared all of it.

First there were 3 salads. These were the Kale Coconut Tofu Salad, the Urban Grove Antioxidant Salad, and the Arugula Beet salad. I was crazy over that kale salad. 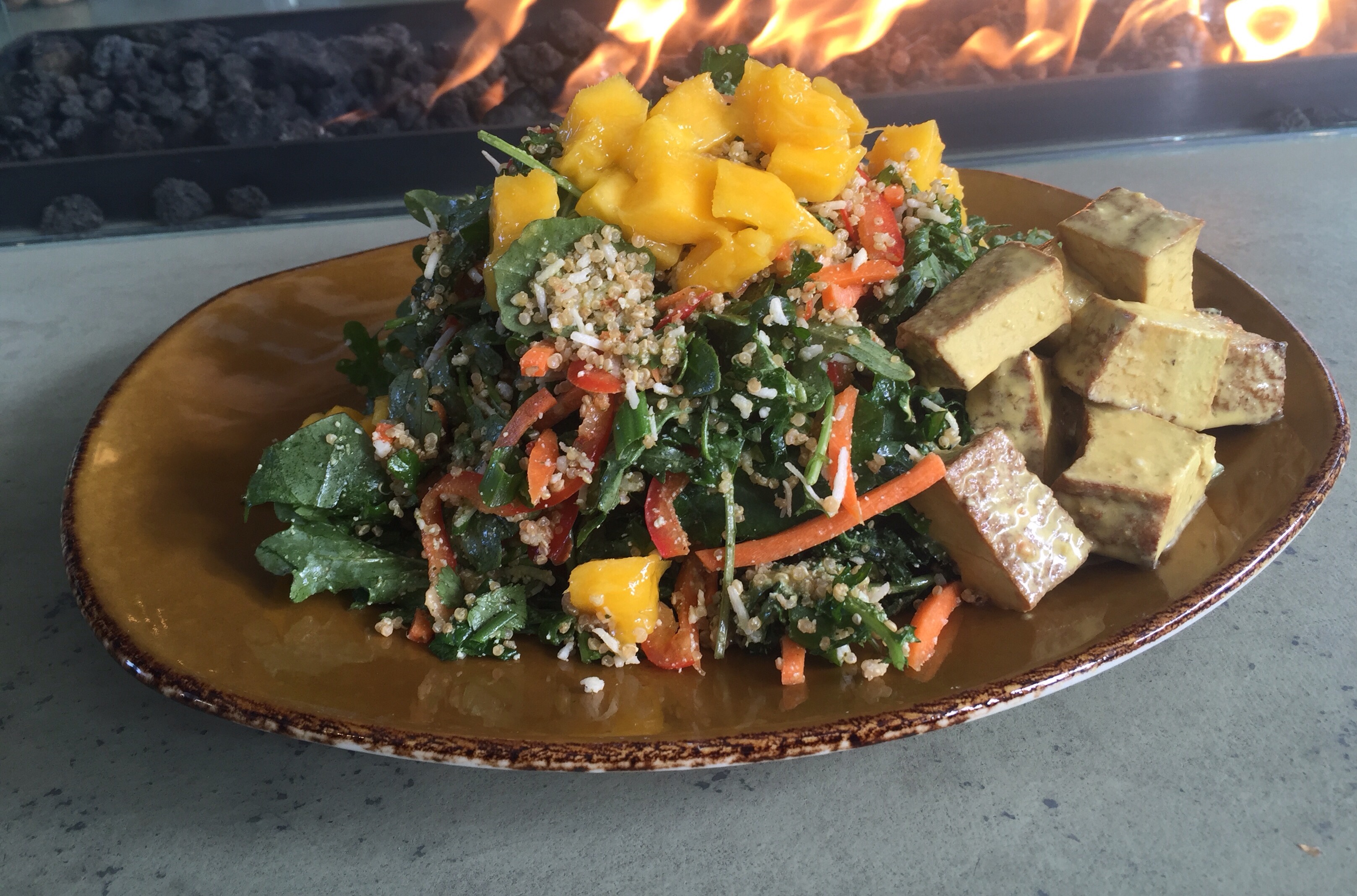 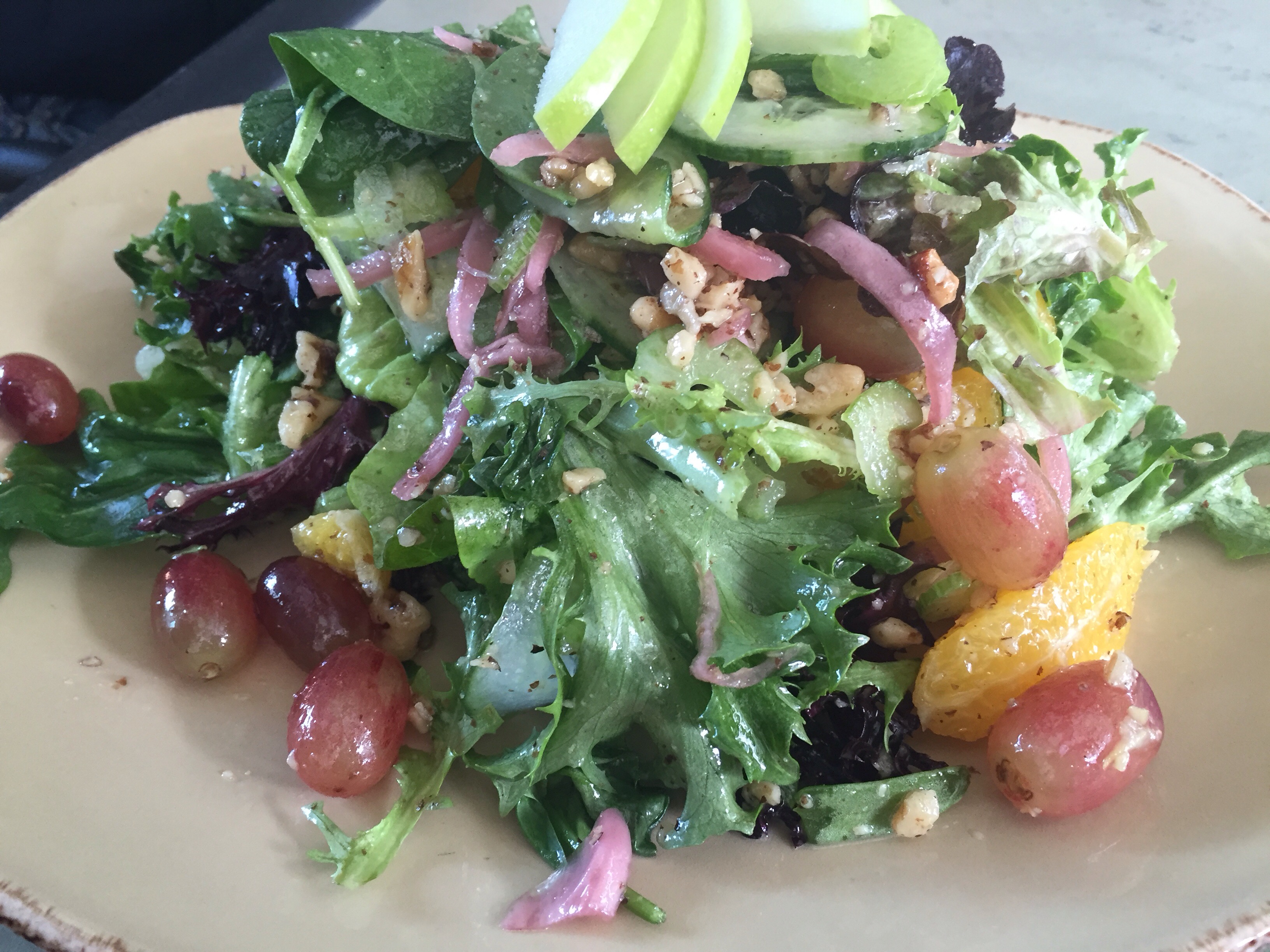 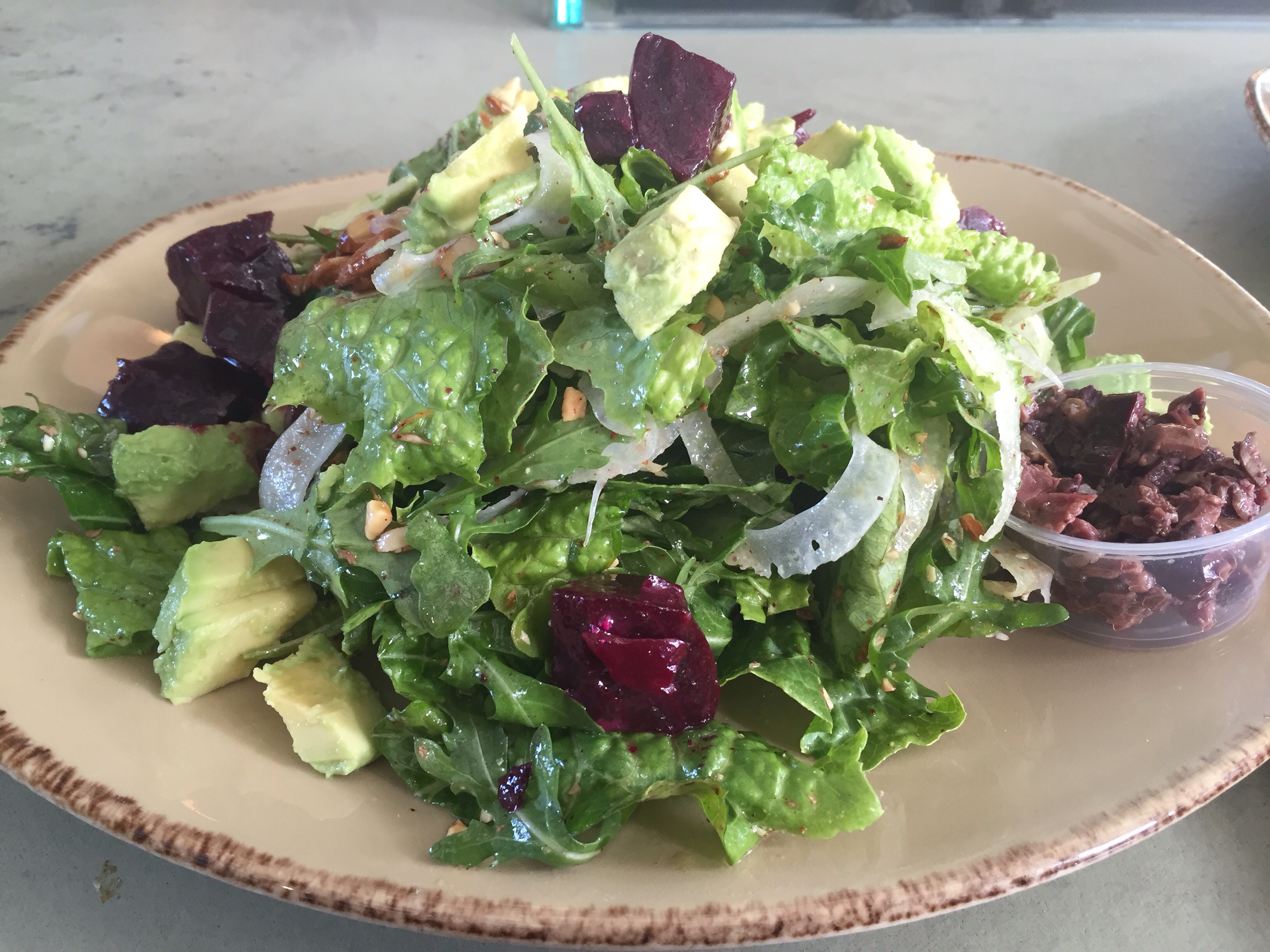 We could’ve just eaten the salads and been done for the day with food because there was so much food and it was so great. But instead we plowed through, crunching and munching. These salads were exquisite and had to be some of the best salads I have ever had. My mom always tells me I take such big bites. But I didnt believe it until I saw myself in this video.

Next we had Vegetable Curry and some plates called 4 ups. 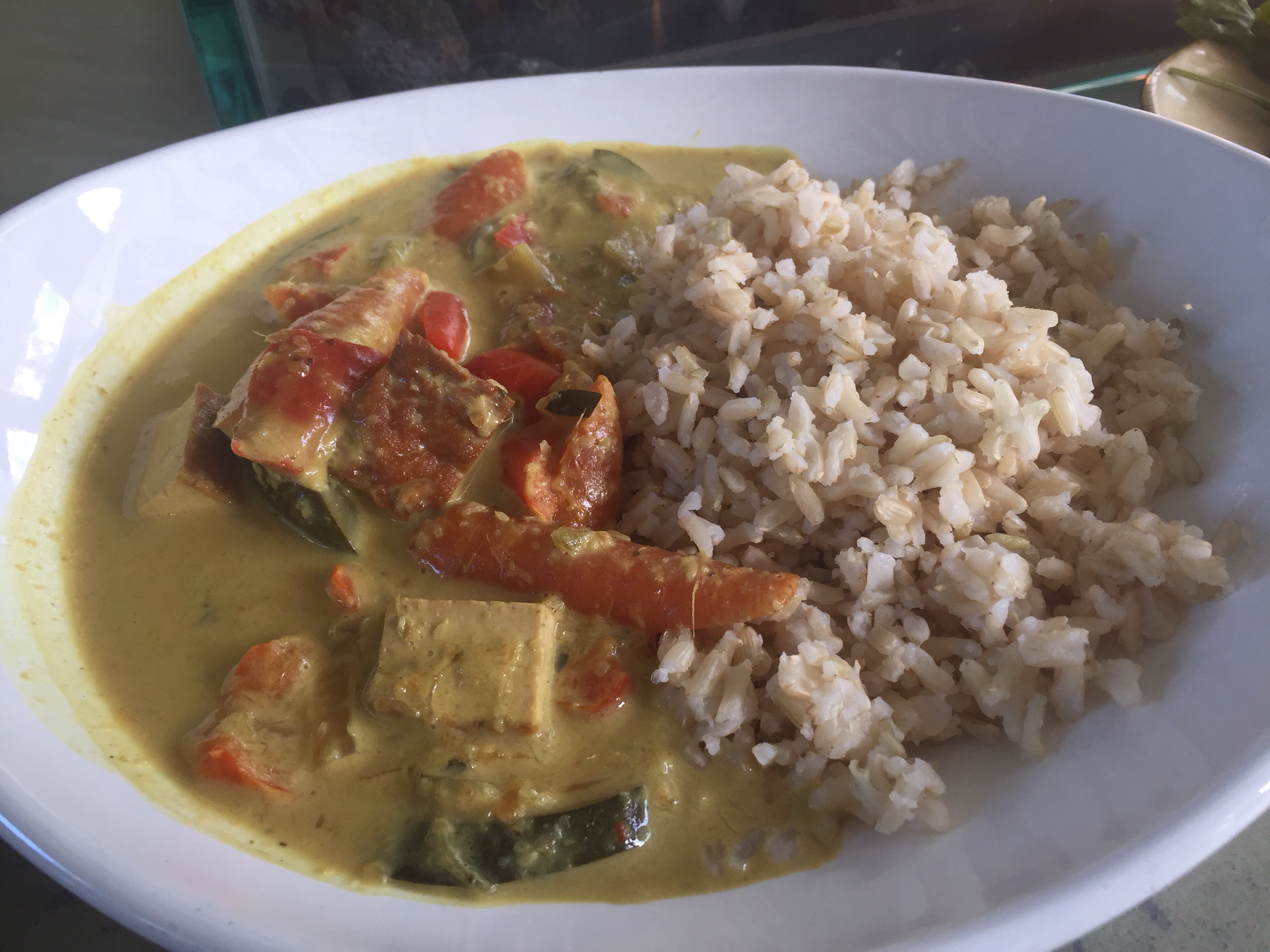 The vegetable curry was so good and it was my favorite dish of the day. Maybe this isn’t surprising because Jen and Kelsey told me this was one of the most popular dishes on the menu.

4 up is a plate of 4 hot or cold sides. I thought that was really creative because you didn’t just have to get 1 thing from their delicious menu and it gave you an idea of maybe what you could get next time. On our cold plate was quinoa salad, beet salad, fruit, and superfood salad. On our hot plate we had broccolini, a cup of soup, cauliflower zucchini, and mushrooms. My mom loved the mushrooms and wouldn’t stop talking about how good they were. This is funny because the mushrooms, also, are supposed to be one of their most popular side dishes. 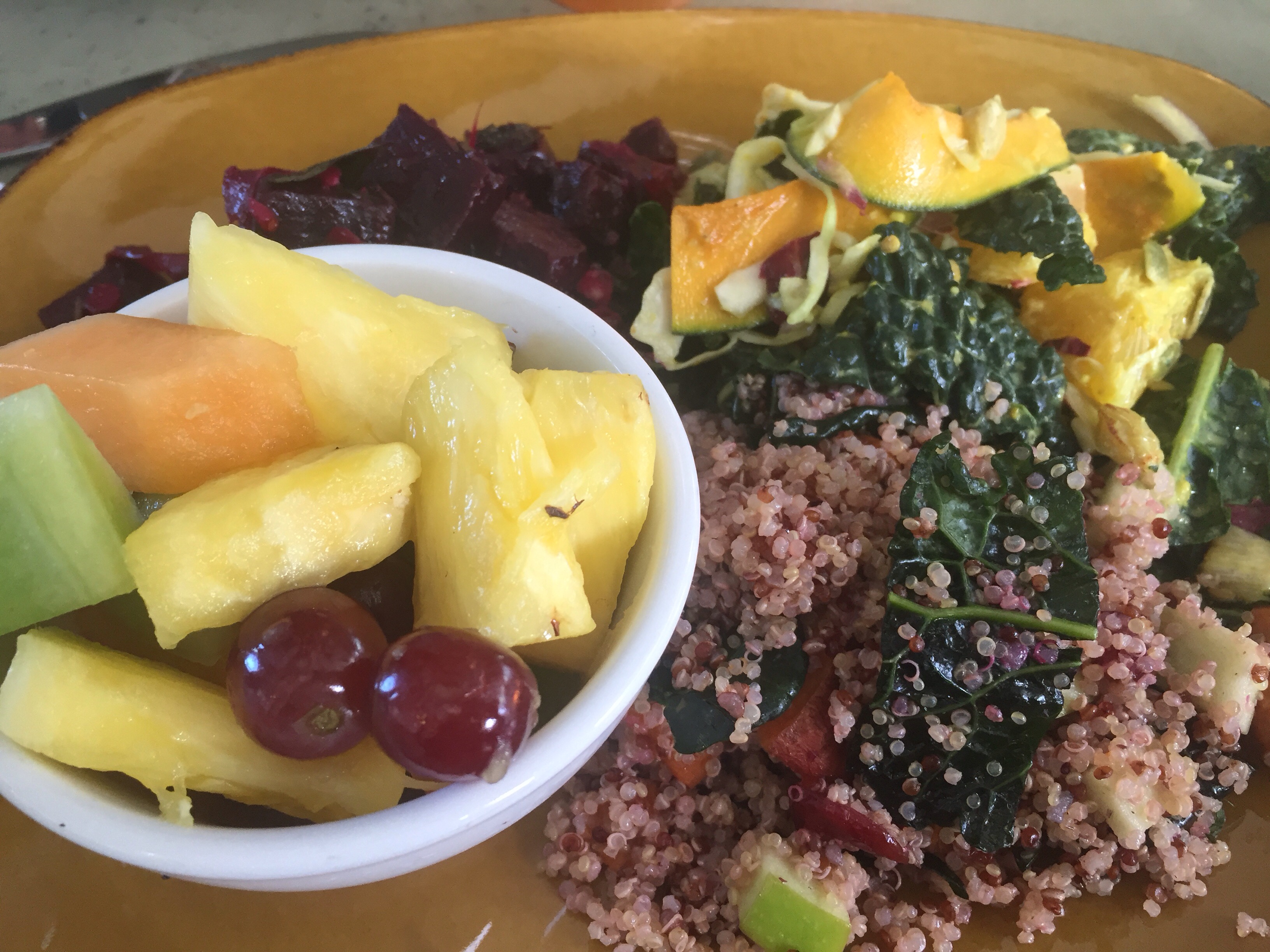 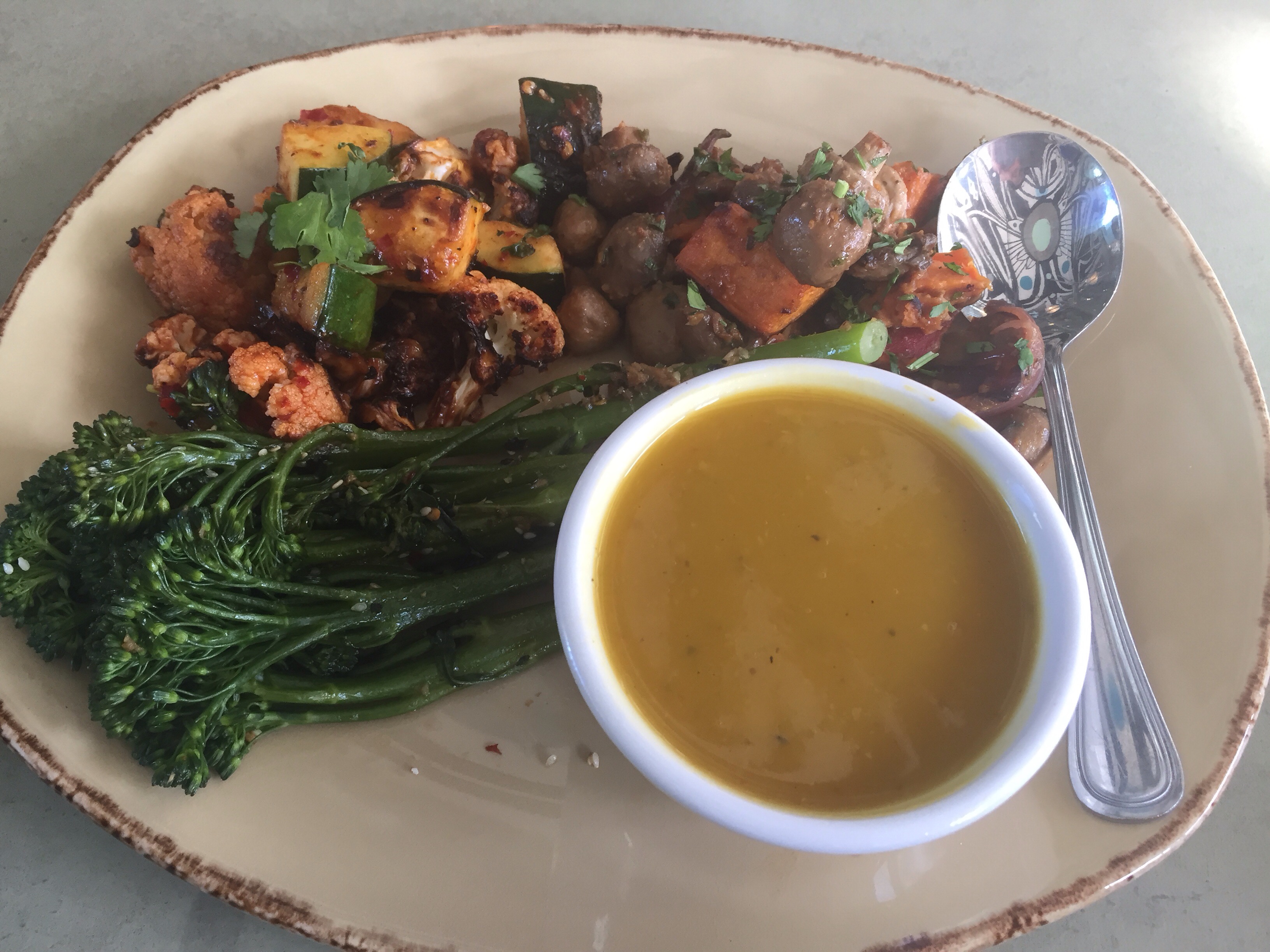 Also, they have an incredible selection of drinks. We tried the pomegranate, cranberry, apple and ginger juice, the carrot orange juice and organic lemonade. These drinks were so colorful and my brother loved the pomegranate juice. 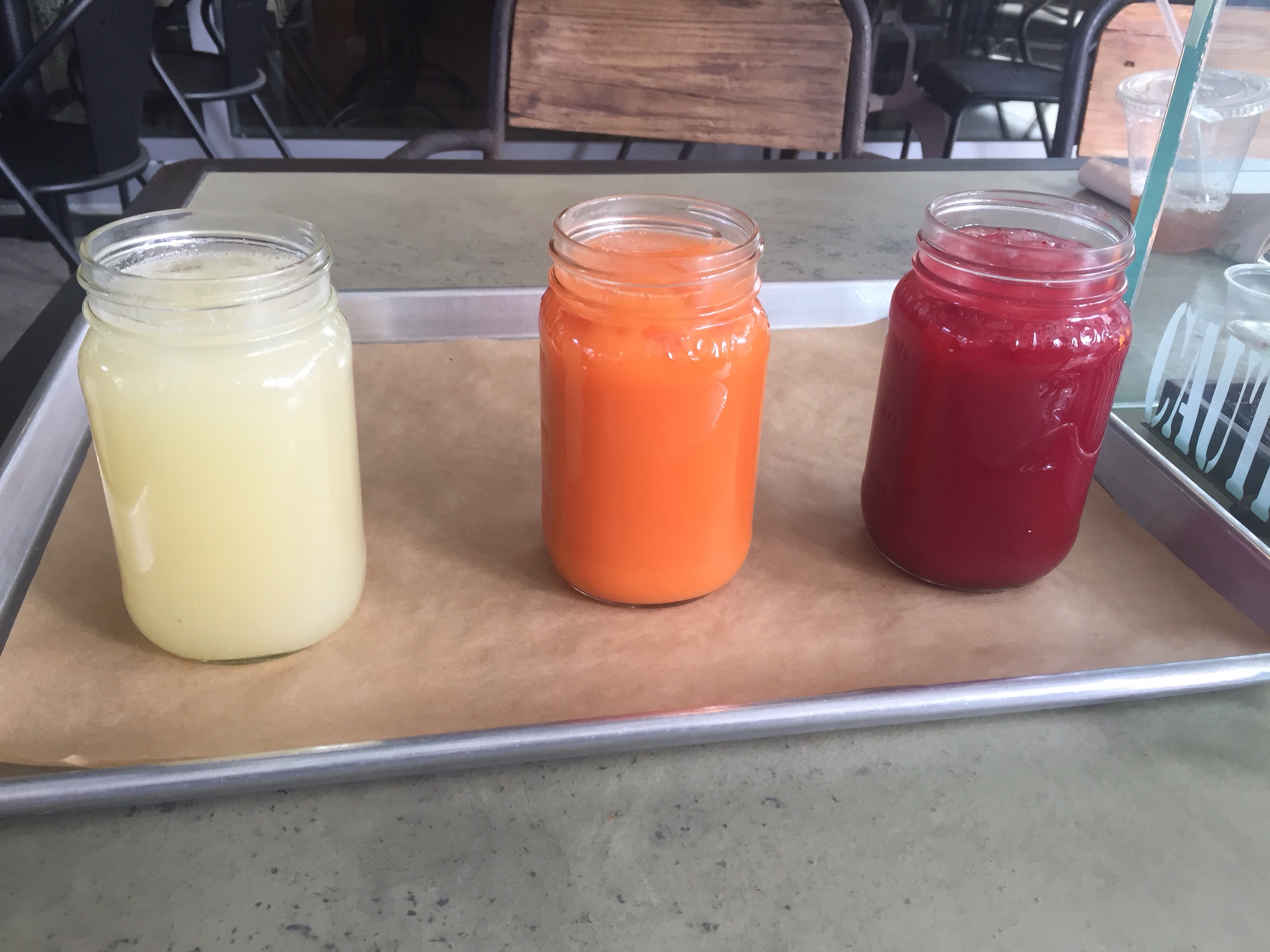 Last but definitely not least, we had some cookies. They have a lot of desserts there and some choices are gluten free. Chef Jen told us they are adding even more gluten free desserts to the menu! 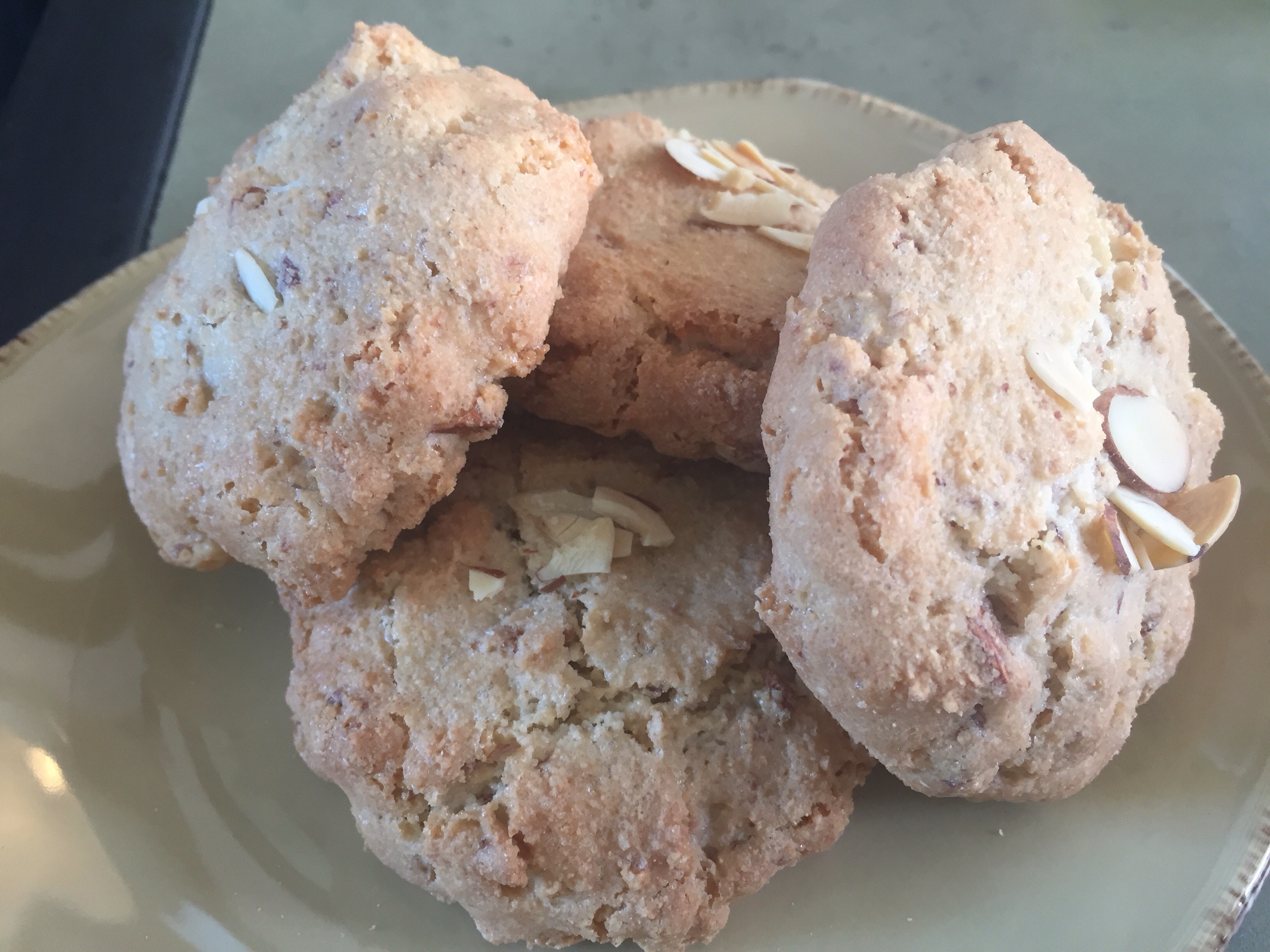 Of course these were so scrumptious but to tell you how full I was, I couldn’t even finish mine! I was sooooooooooo tired and full. It had been a great, great day.  You can see what I mean, below.