This food is powerful 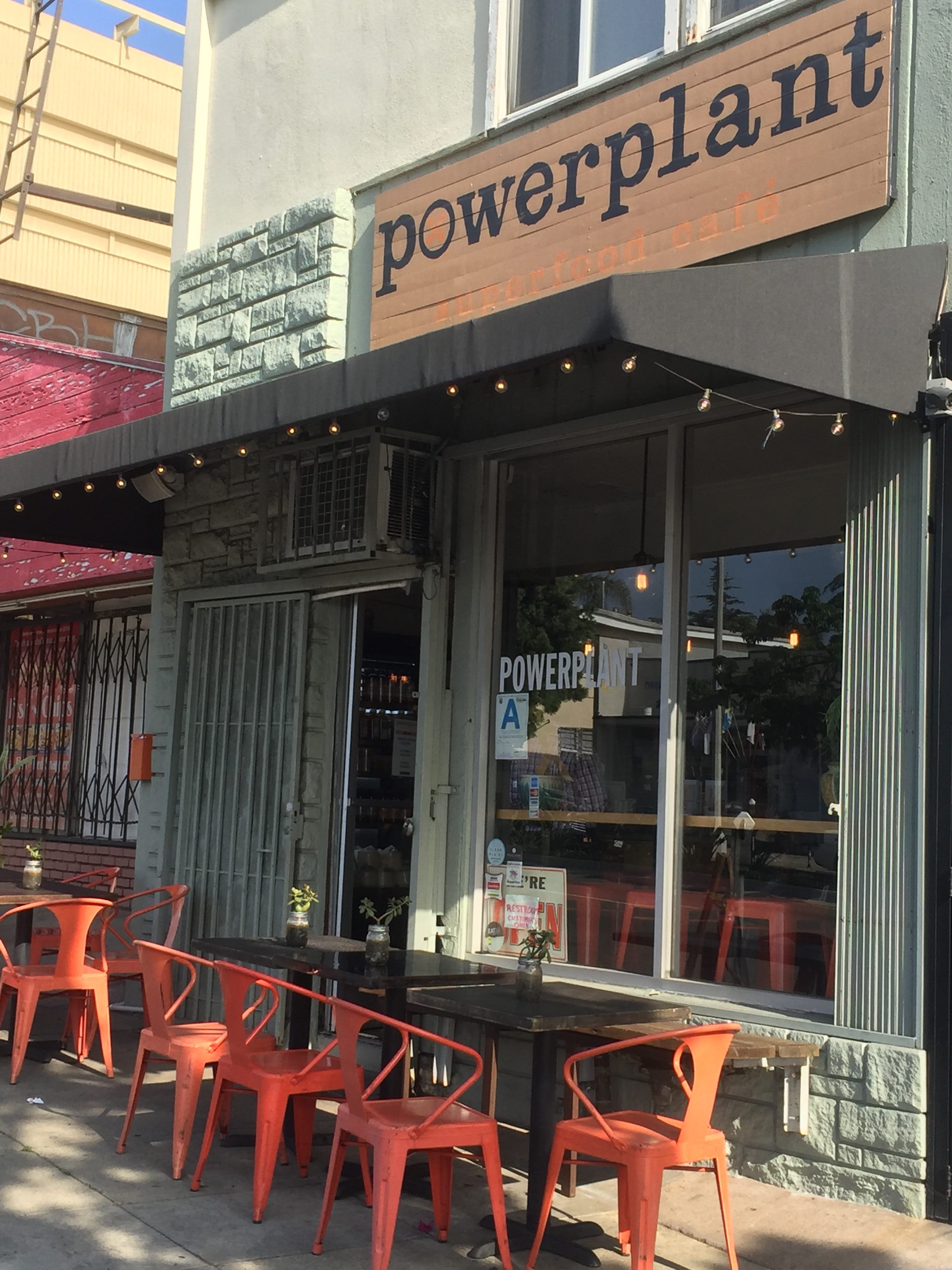 Last weekend my brother and my dad went skiing at Big Bear so my mom and I had the day to ourselves and we decided to go out for brunch at Powerplant Superfood Cafe on Pico Boulevard in Los Angeles.  It is small but comfortable and when we walked in my mom and a woman immediately recognized each other.  They had trouble figuring out where they had met, but then we remembered that we all went to the conference ShiftCon. That was a conference me and my mom went to when my blog was not quite as big as it now is today.  We brought home so many good food samples and I loved that!

This woman was a food blogger like me.  Her name was Jenny from Real Food Scout.  She was with her 6 year old son named James.  He was super cute, and was very interested in telling us about his LEGOS.   My mom told him about our tray of LEGOS that my grandpa built.  We had too many LEGOS to put them on a table, so we built a tray that was just the right size to fit under my brother’s bed.  I was only half listening to that conversation though because I was so focused on the food. 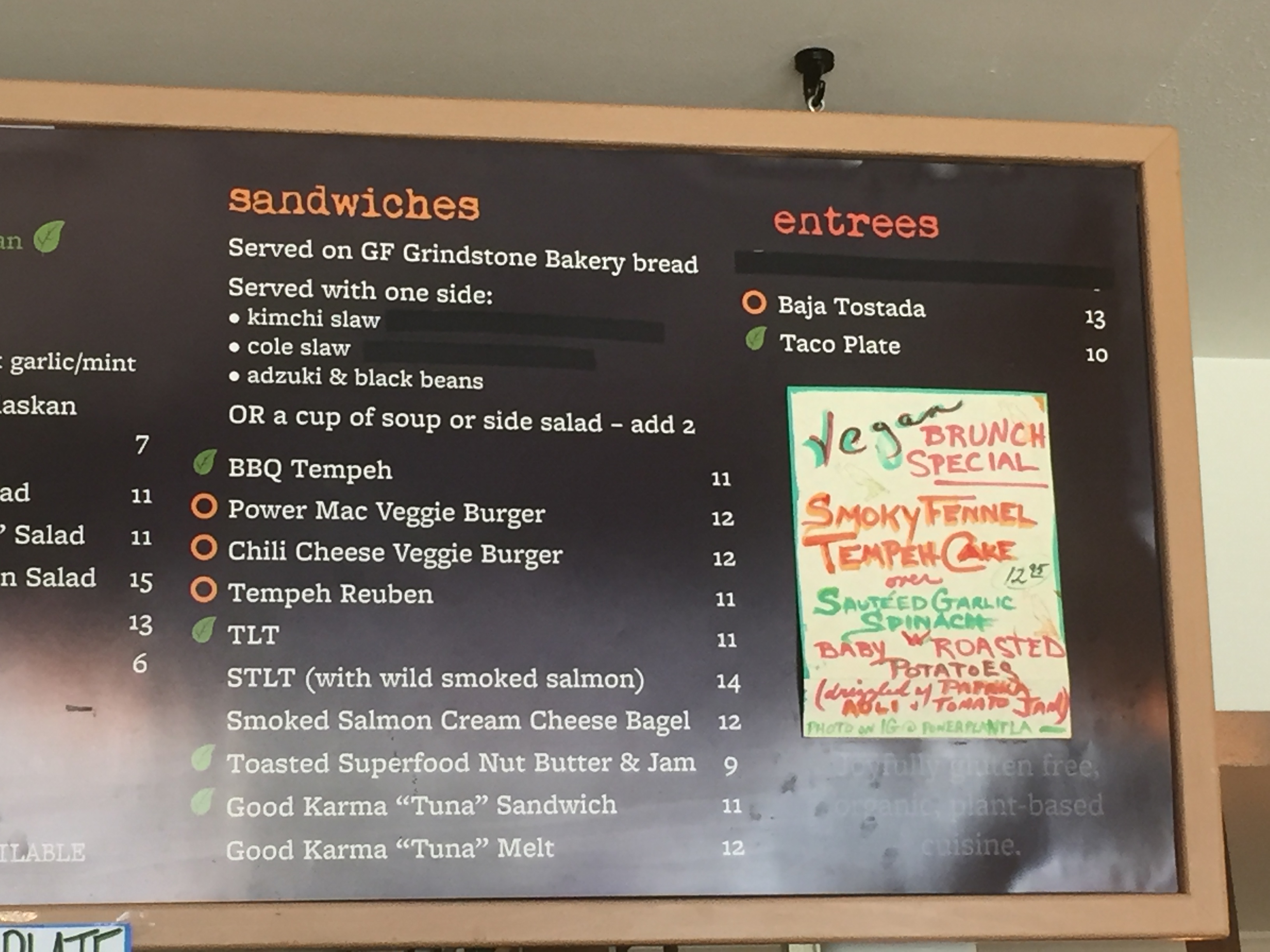 When we went up to order there were so many choices.  I italicized that because I mean it.  There were at least 15 things and I could choose any of them.  This whole place is gluten free!  But I could not choose.  There were so many choices and the only way I could decide which one I wanted was asking which one was the biggest plate of food.  When the woman answered “French Toast” I knew I could count on it.  I ordered the ginormous plate of food which came a side of tempeh bacon along with the french toast. 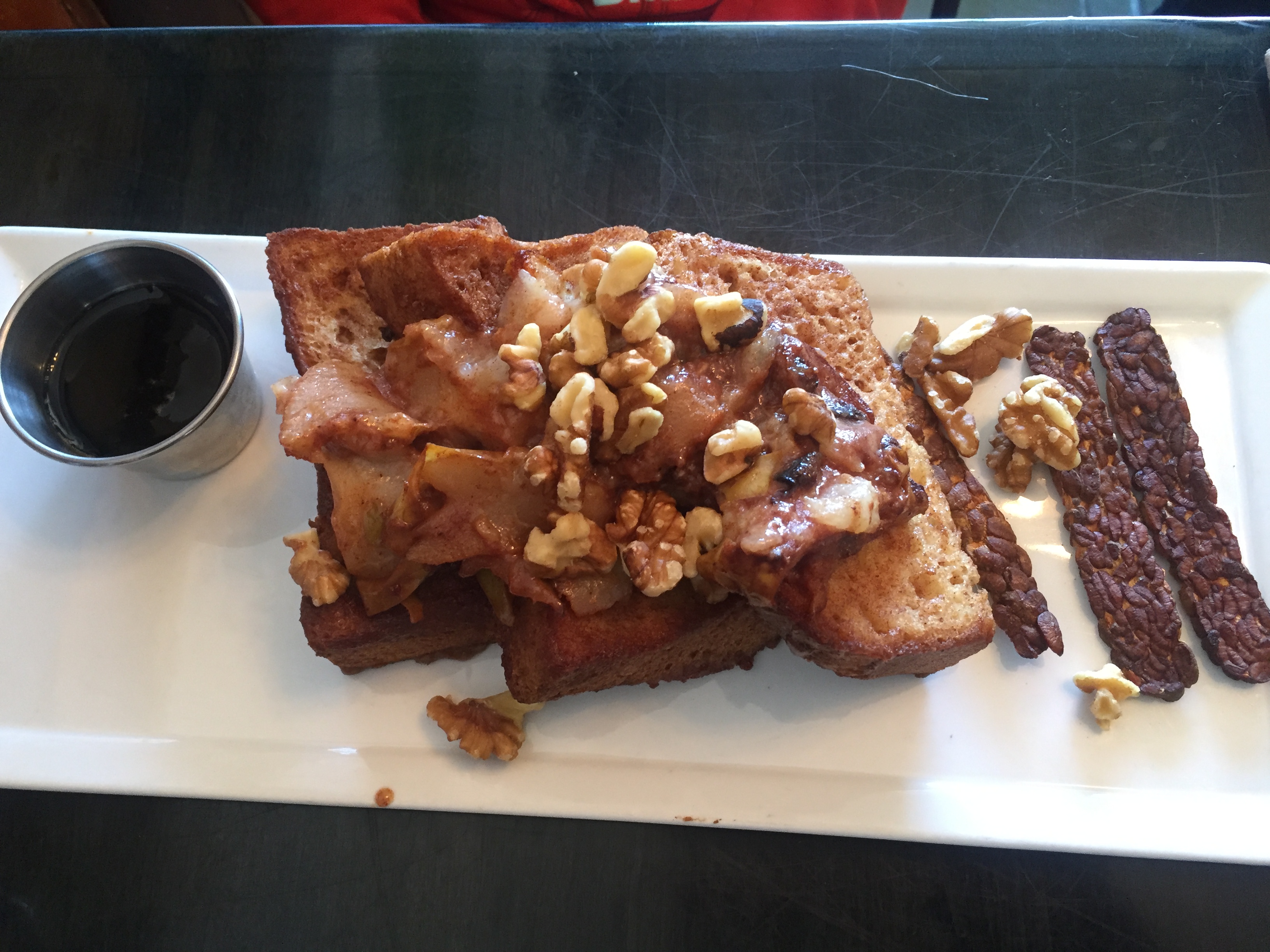 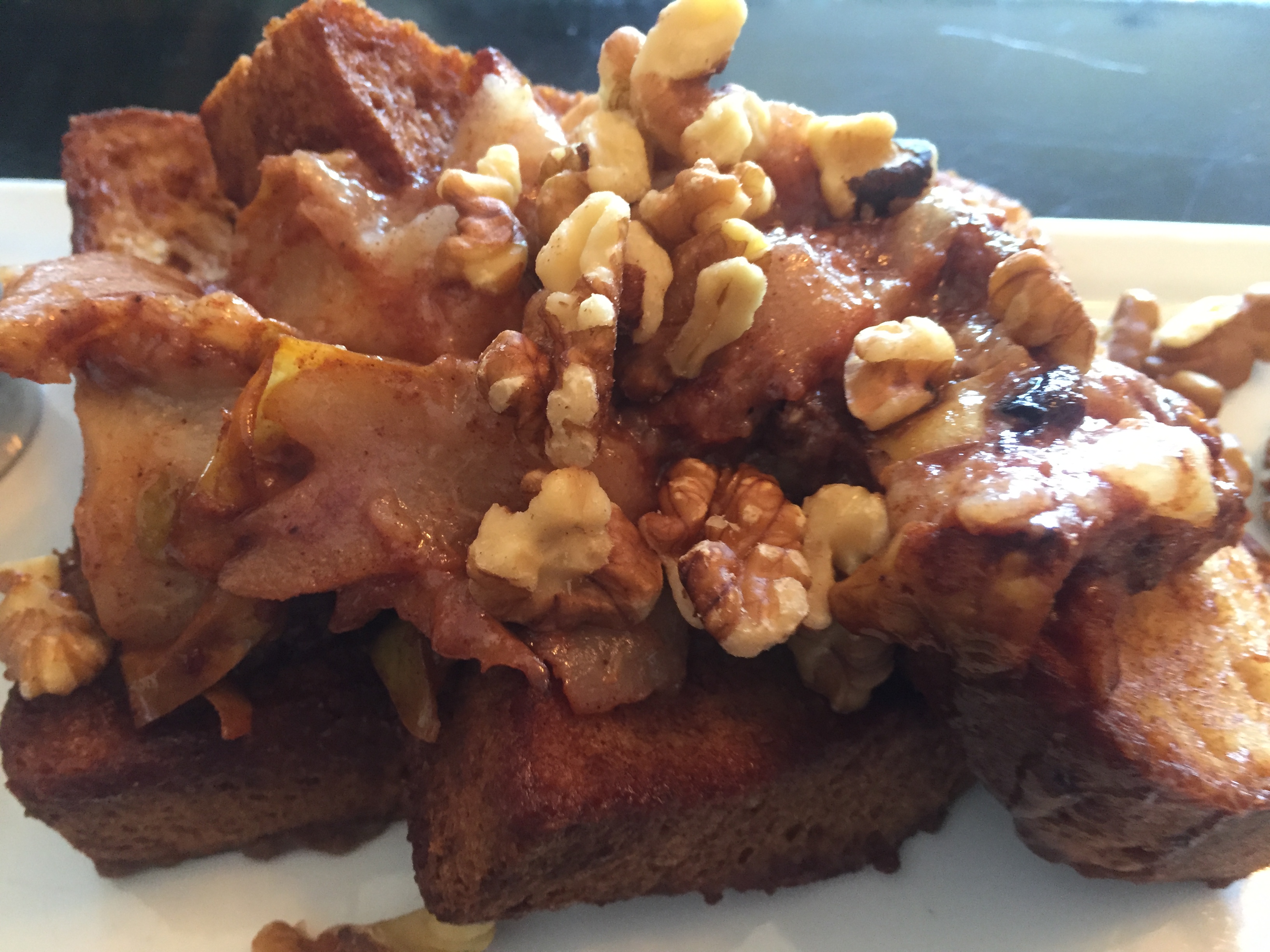 When it came I grabbed the fork, plowed through the moist bread and shoveled a piece into my mouth….If you know the Captain Underpants books, you ‘ll know the phrase “Before I tell you that story I have to tell you this story.”  This is kind of what I’m doing here.  So now I can describe the food.  The big pieces of french toast were covered in a pear topping.  The soft pears combined with the maple syrup made a delicious combination for my taste buds to gobble.  The walnuts sprinkled around the plate got drizzled with the syrup and it made them seem like candied walnuts.  This was truly incredible. 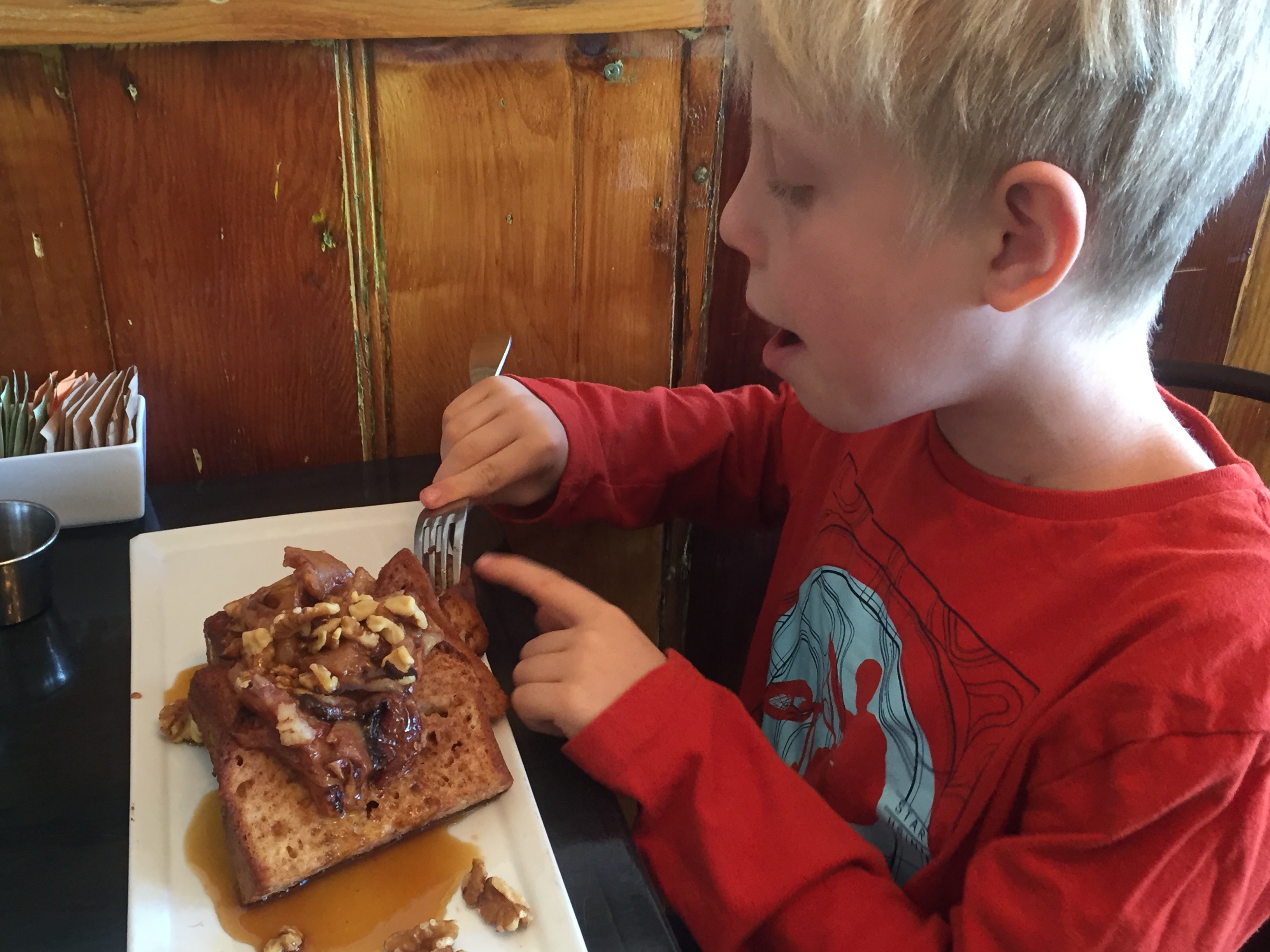 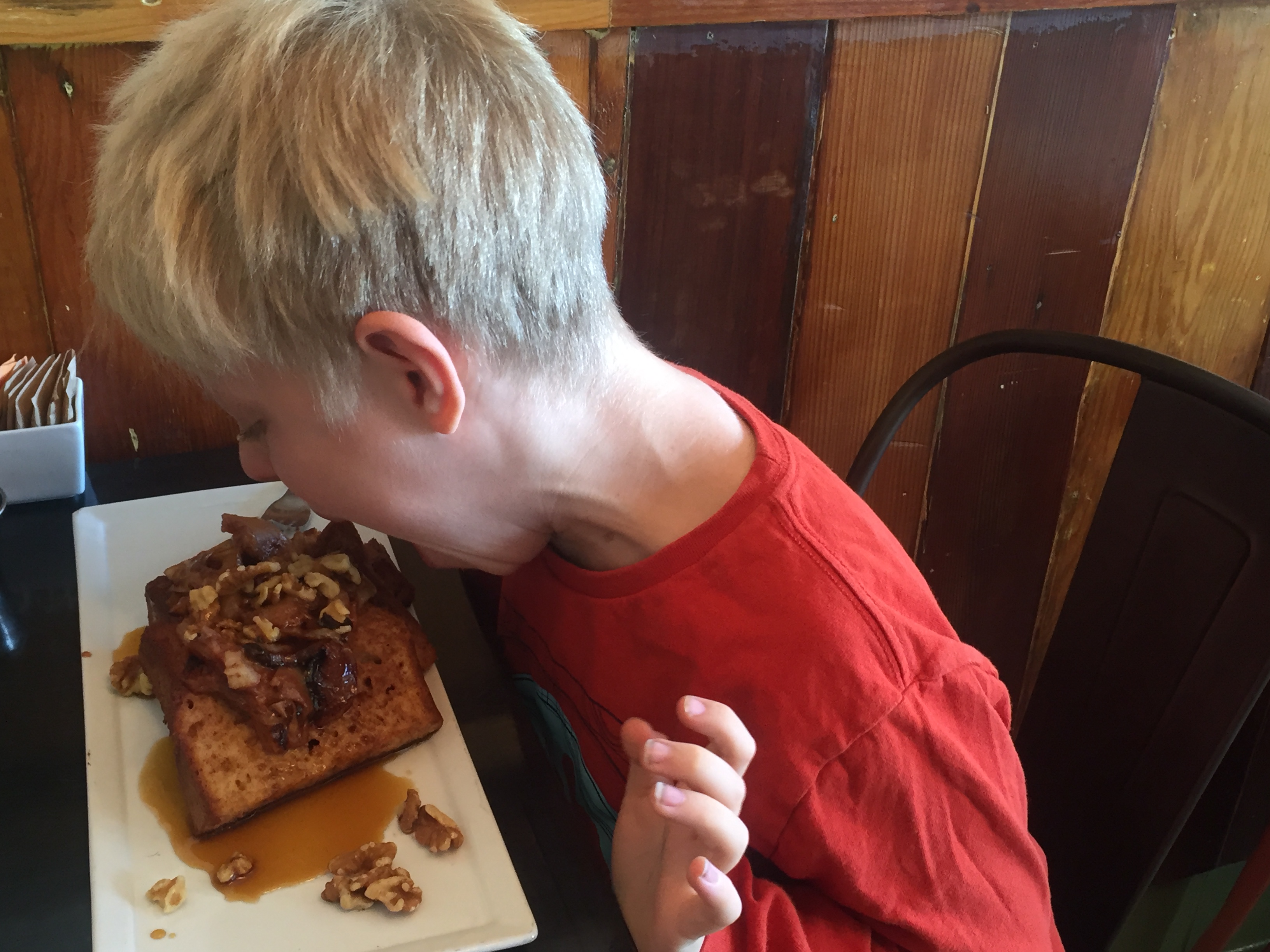 We were really full, but wanted to take home some desserts.  So we got them to go so we could save them for later.  After much thought, my mom ordered a grasshopper minty chocolate covered cookie, while I ordered a cinnamon bun.  I hadn’t wanted to share the French Toast at breakfast, and I also wanted to just have the cinnamon bun for myself because I thought it would be better.  But Mom wore me down, and we ended up splitting the desserts in half and sharing.   Good news for me though, the grasshopper cookie was actually my favorite. The cinnamon bun was really good though and I enjoyed both of them. 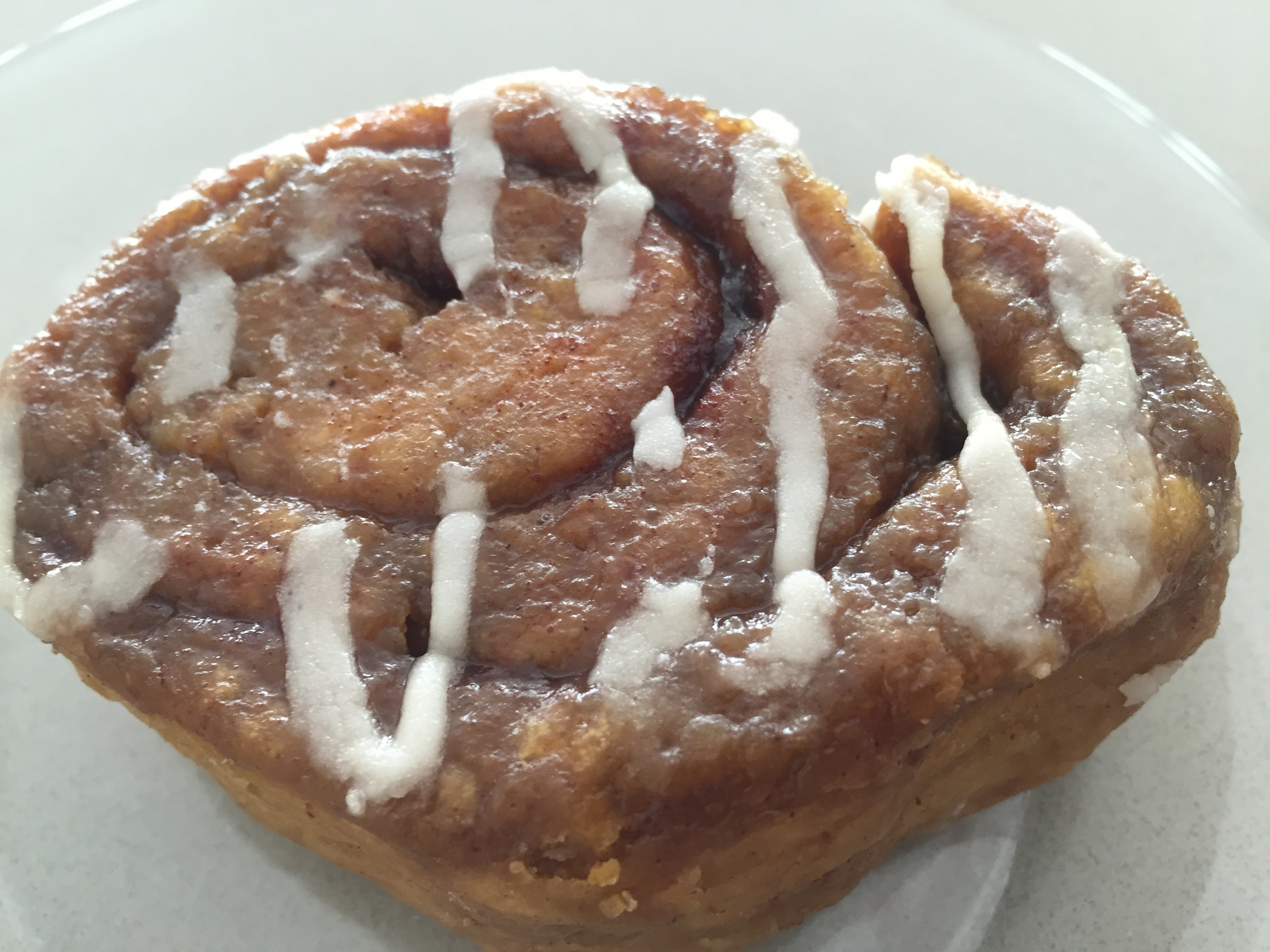 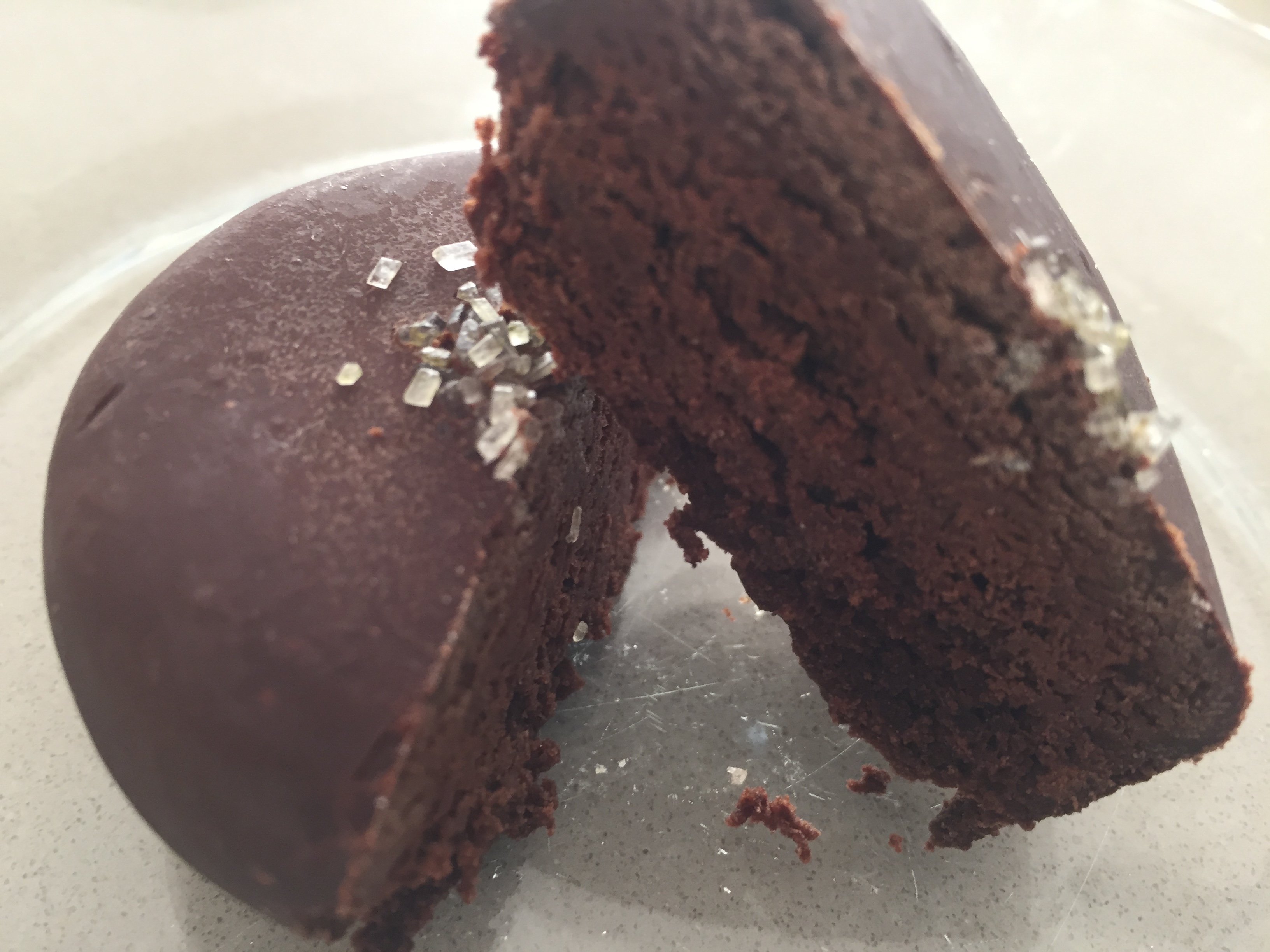 If you are searching for a healthy gluten free vegan breakfast place, stop that search.  Powerplant Superfood Cafe is that place.